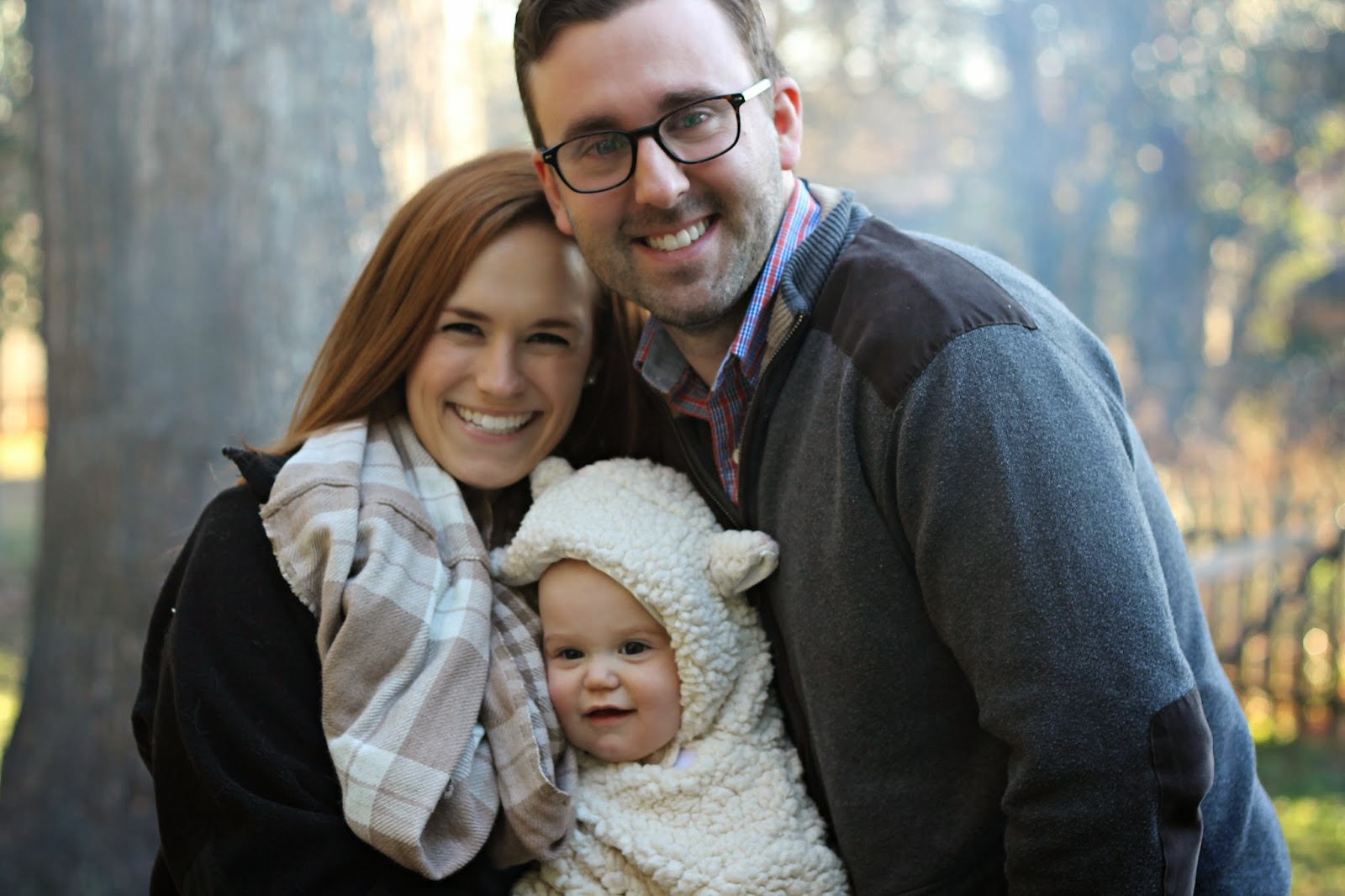 To be completely honest, we rang in the new year asleep in bed by 10 pm. And I kind of liked it. No crowds, no expensive covers, no taxis and no hangover. However, we did have some of our best friends over on New Year’s Day to really kick off the year right — friends, fire, food, football (and bubbly)! It doesn’t get better than that! 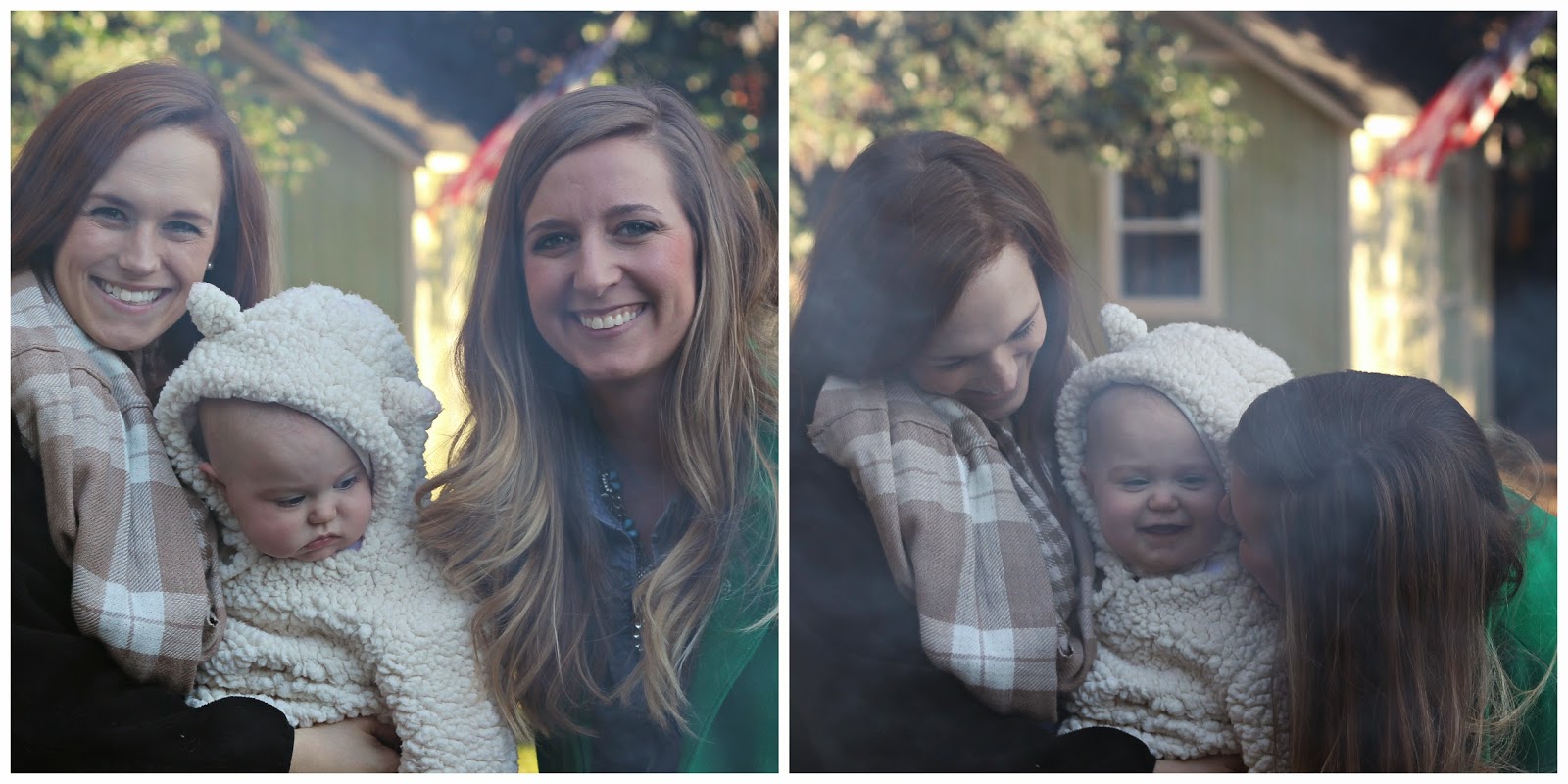 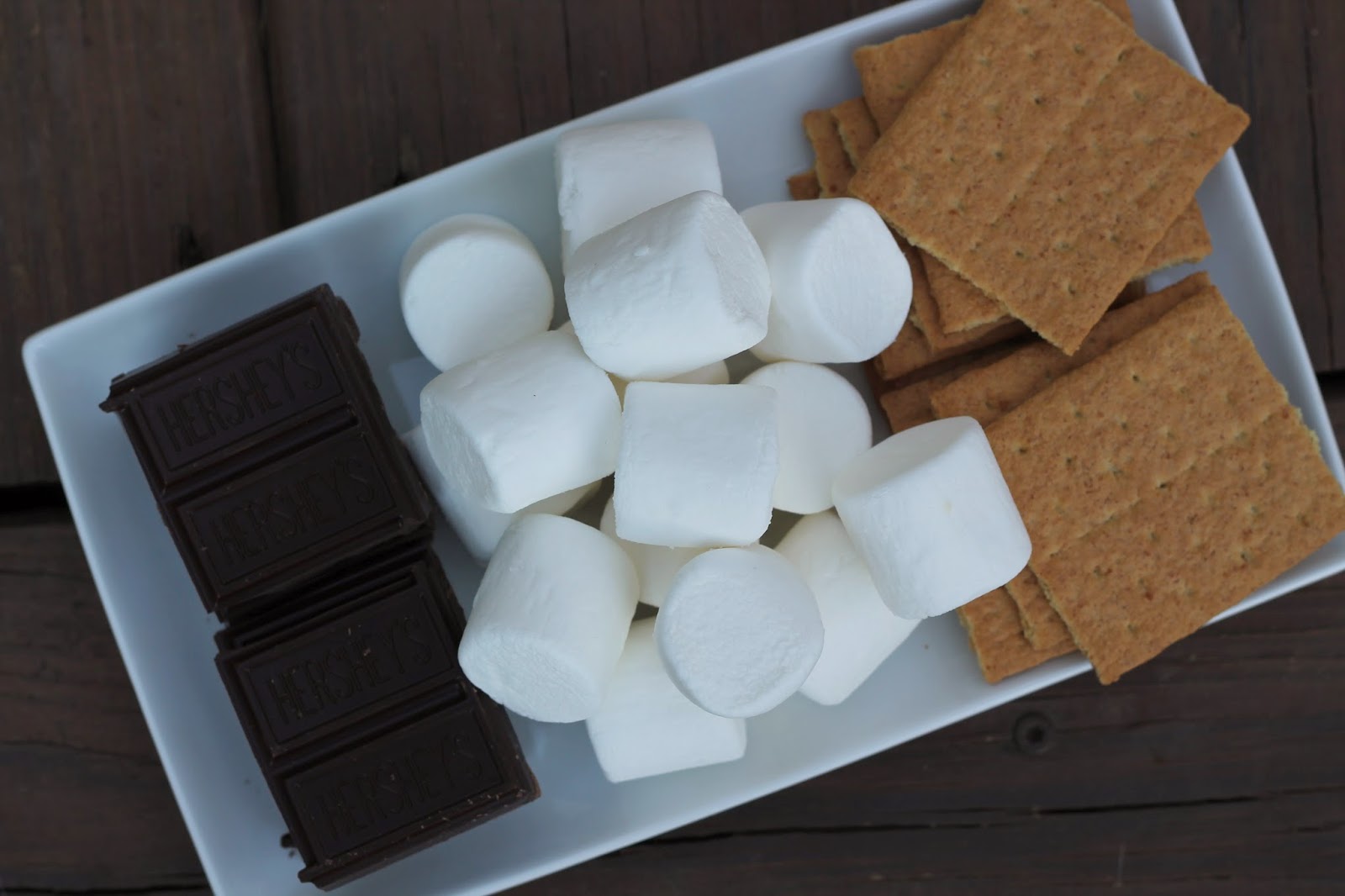 It was a beautiful sunny and chilly day in Charlotte so we broke out our new fire pit (and fire pit fishing poles) and roasted some s’mores. 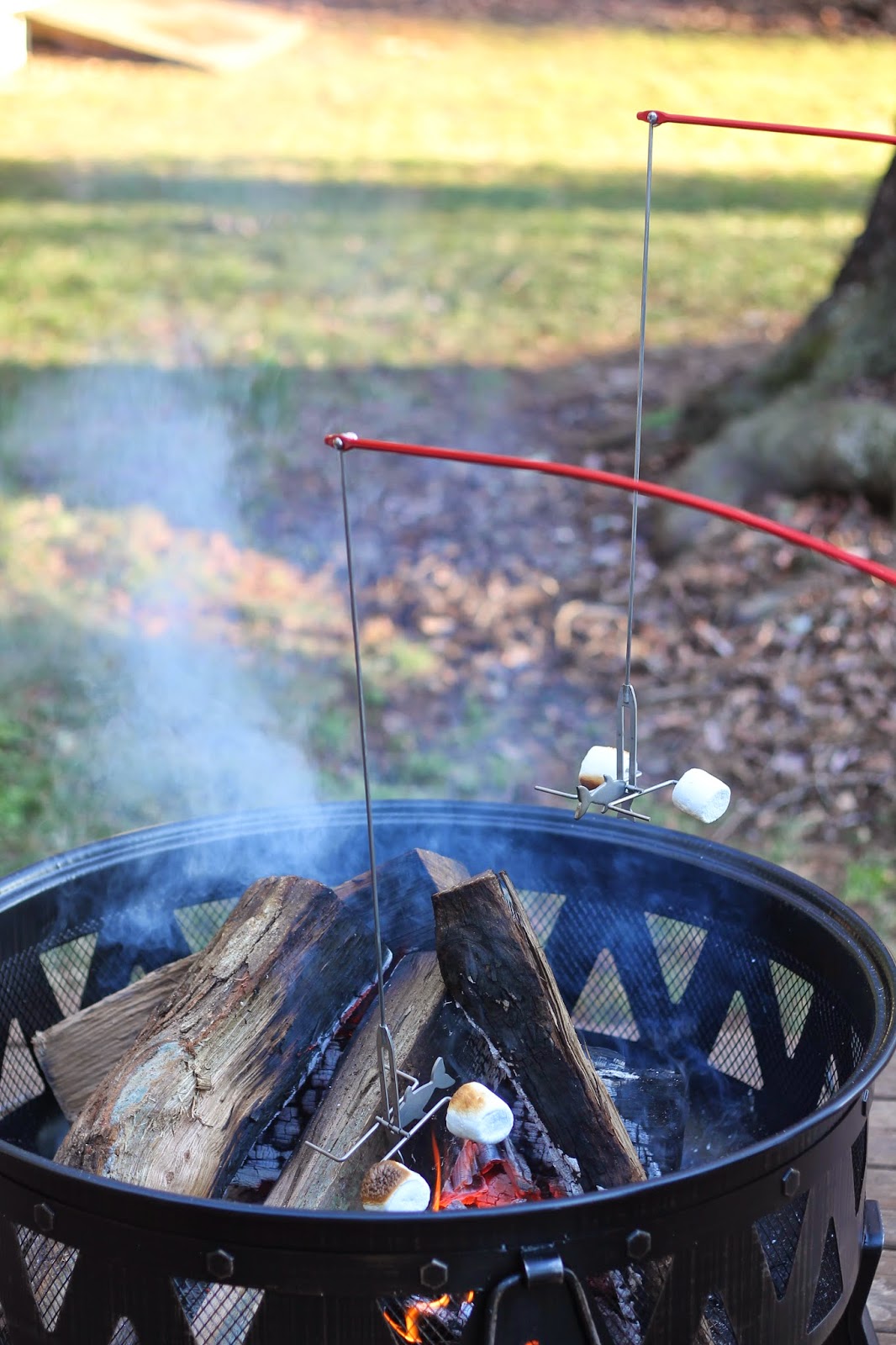 Our menu for New Year’s Day consisted of the traditional southern meal
designed to bring a year of good health, good luck, good fortune and love. For
as long as I can remember my mom has cooked up this tasty meal and this
year we decided to carry on the tradition. After all, we’re pretty dang
excited to start a fresh new year! Here are the five foods that made up
our tasty New Years day meal: 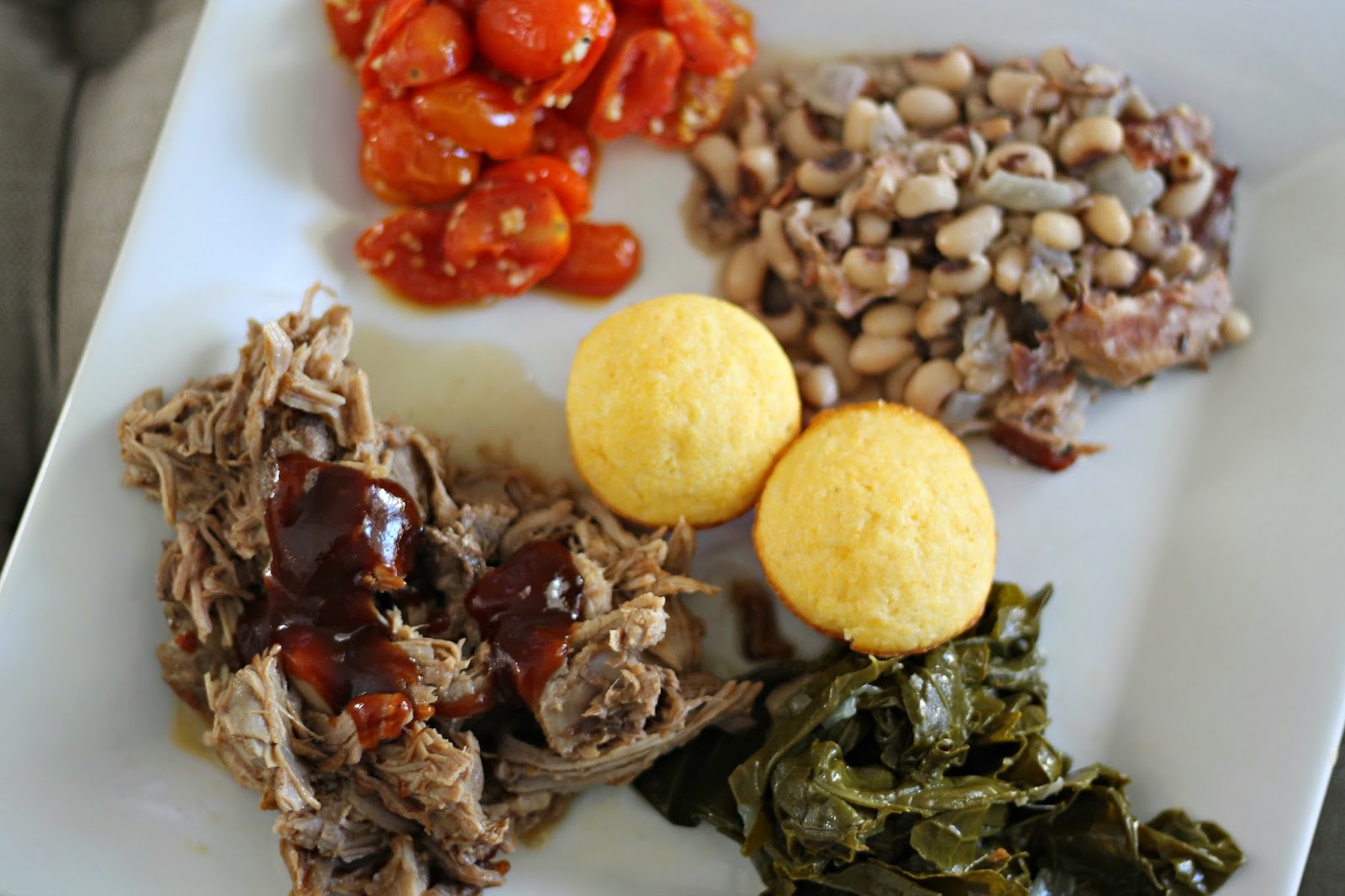 1. PORK. I slow cooked a pork shoulder for lunch but you can also use ham, tenderloin, etc. The tradition of eating pork on New Year’s Day is based on the idea that pigs symbolize progress. The animal pushes forward, rooting itself in the ground before moving. This moving forward is seen as a symbol of moving forward in the New Year.

Place onions in the bottom of crock pot. Blend together salt, pepper, red pepper flakes, paprika, garlic powder and sugar; Rub over roast and place in crock pot. In a small bowl combine apple cider, apple juice and liquid smoke. Pour half of the mixture over the roast. Set the timer to cook on low for approximately 8-10 hours. The roast should be ready to fall apart when you stick a fork in it. Remove meat and onions. Discard onions and shred the pork. Pour remaining juice mixture over meat before serving. Serve alone or on a bun.

2. COOKED GREENS. Cooked greens such as cabbage, collards, kale, turnips, etc. symbolize wealth, prosperity and good fortune because their green leaves look like folded money. It’s widely believed that the more greens you eat, the more prosperous you will become during the year ahead. Laura brought over the tastiest turnips for our meal. I’d never had turnips before but they were delicious!

3. BLACK EYE PEAS. Legumes including beans, peas, and lentils are also symbolic of good luck.
Their small, seedlike appearance resembles coins that swell when cooked
so they are consumed with financial rewards in mind. After the Civil War, hungry Union soldiers ate up Southern crops, but they left behind black-eyed peas, which they considered livestock feed; the Southerners fortunately discovered the black-eyed peas and the legume was thereafter
considered lucky. Today, some southerners believe in eating one pea for every day in the new year.

From Taste of Home

Directions:
1. Place peas and bacon in a large Dutch oven; add water to cover. Bring to a boil; boil for 2 minutes. Remove from the heat; let soak, covered, for 1 hour. Do not drain.
2. In a skillet, heat butter over medium-high heat. Add onion; cook and stir until tender. Add garlic; cook 1 minute longer. Stir in thyme and salt.
3. Add to pea mixture; return to the heat. Cook, covered, over medium heat for 30 minutes or until peas are tender, stirring occasionally. If desired, top with additional crumbled bacon.

4. CORN BREAD. Corn bread, which symbolizes gold, completes the traditional Southern meal. Also, baking your corn bread in a round skillet is believed to bring a continuous circle of prosperity. I kept this part simple and baked up lots of mini muffins using a box of Jiffy corn muffin mix.

5. TOMATOES. I recently read A Healthy Slice of Life’s post {here} on how she incorporates tomatoes as part of her New Year’s Day meal as a symbol of love! I thought this was such an awesome addition that I decided to incorporate her tradition in our home too! I roasted ours in olive oil and lots of garlic.

Directions:
Preheat oven to 375°F. In a medium bowl, toss together tomatoes, garlic, olive oil, salt and pepper. Transfer to a baking sheet and spread into an even layer. Bake for 20-25 minutes, or until tomatoes are soft.

And that’s how we spent our first day of the new year!