On Friday Caroline and I took a quick mommy-daughter trip down to Florida to see my family! The boys stayed back for a daddy-son weekend and had the absolute best time together! I was worried about how both kids would handle a weekend separation but it turns out that solo time with one parent is pretty dang awesome for both of them. 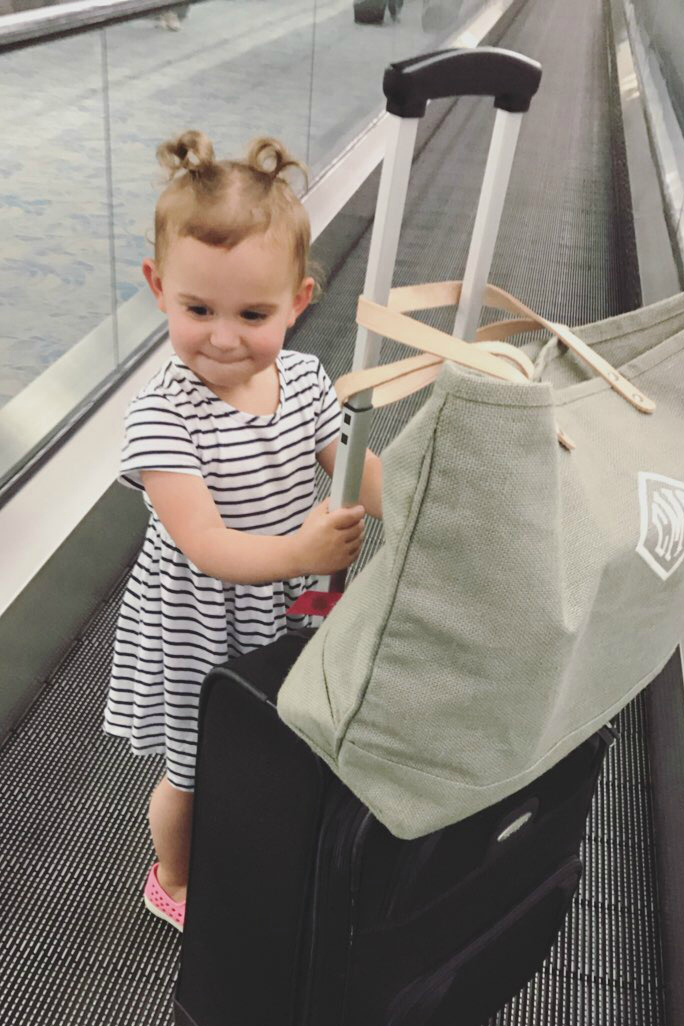 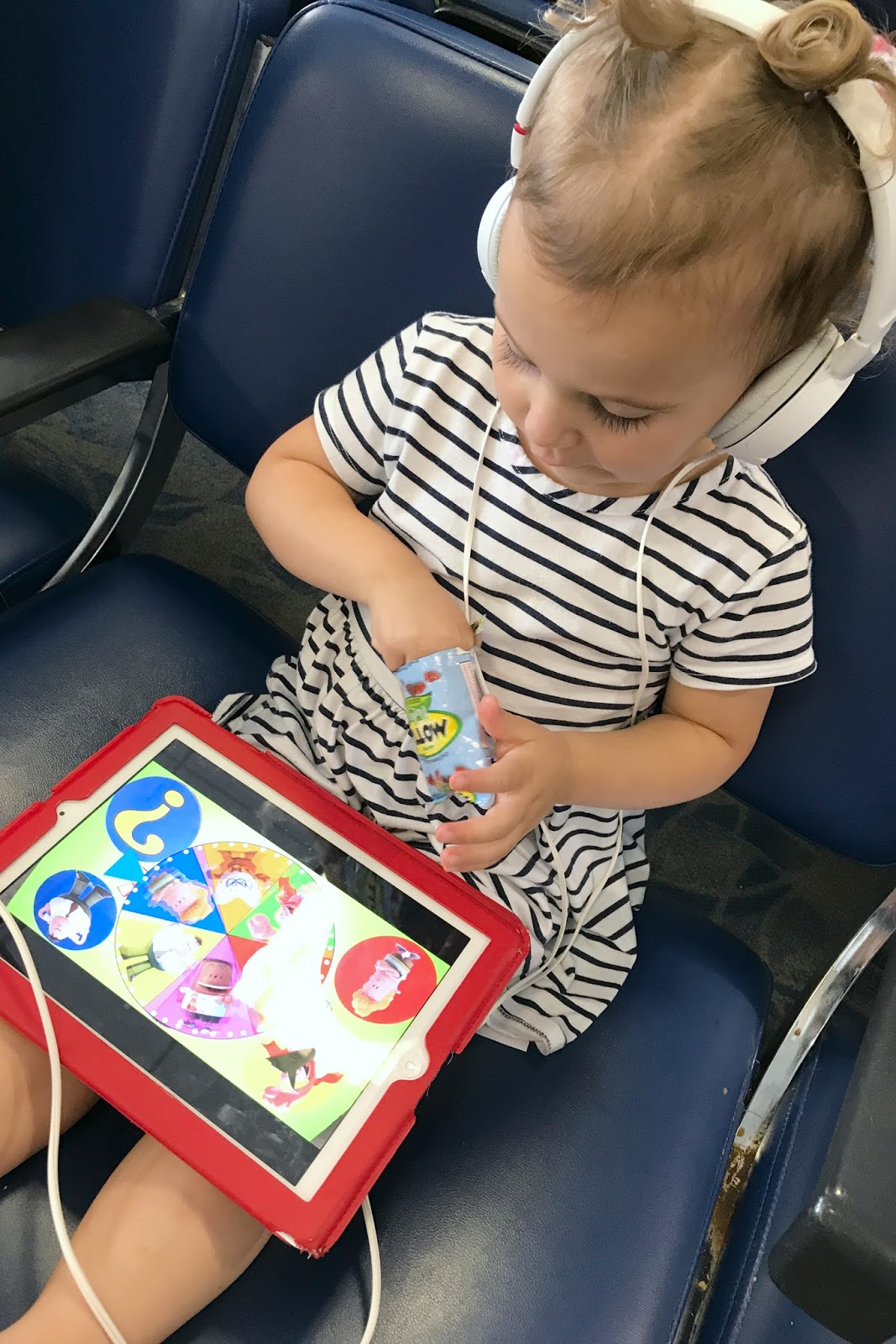 Despite missing a nap, dinnertime and two flight delays, Caroline was a
total champ. I love this age. A bag of lollipops and Paw Patrol on the
iPad was such a treat that she didn’t mind our late arrival on Friday
evening. Also, I’ve never seen someone freak out in excitement more than
Caroline over the moving sidewalks in the airport. It’s the little
things! 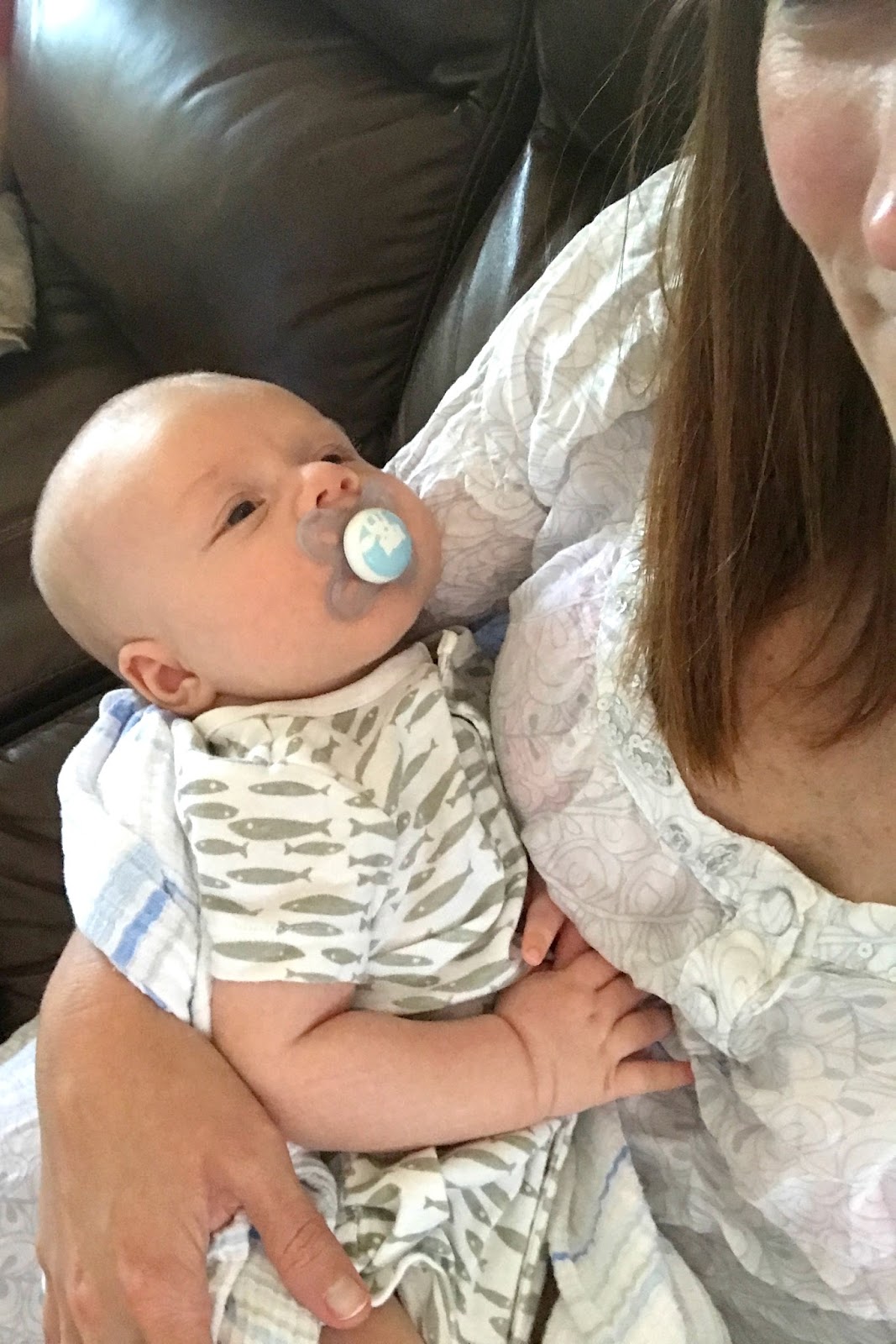 We had lots of family over on Friday night for a cookout and it was so nice to see everyone. And it was especially nice for Dad! He is so happy when the family is together. With only one mini in tow is was incredible how much more time I was able to actually sit down and snuggle baby Beckett! 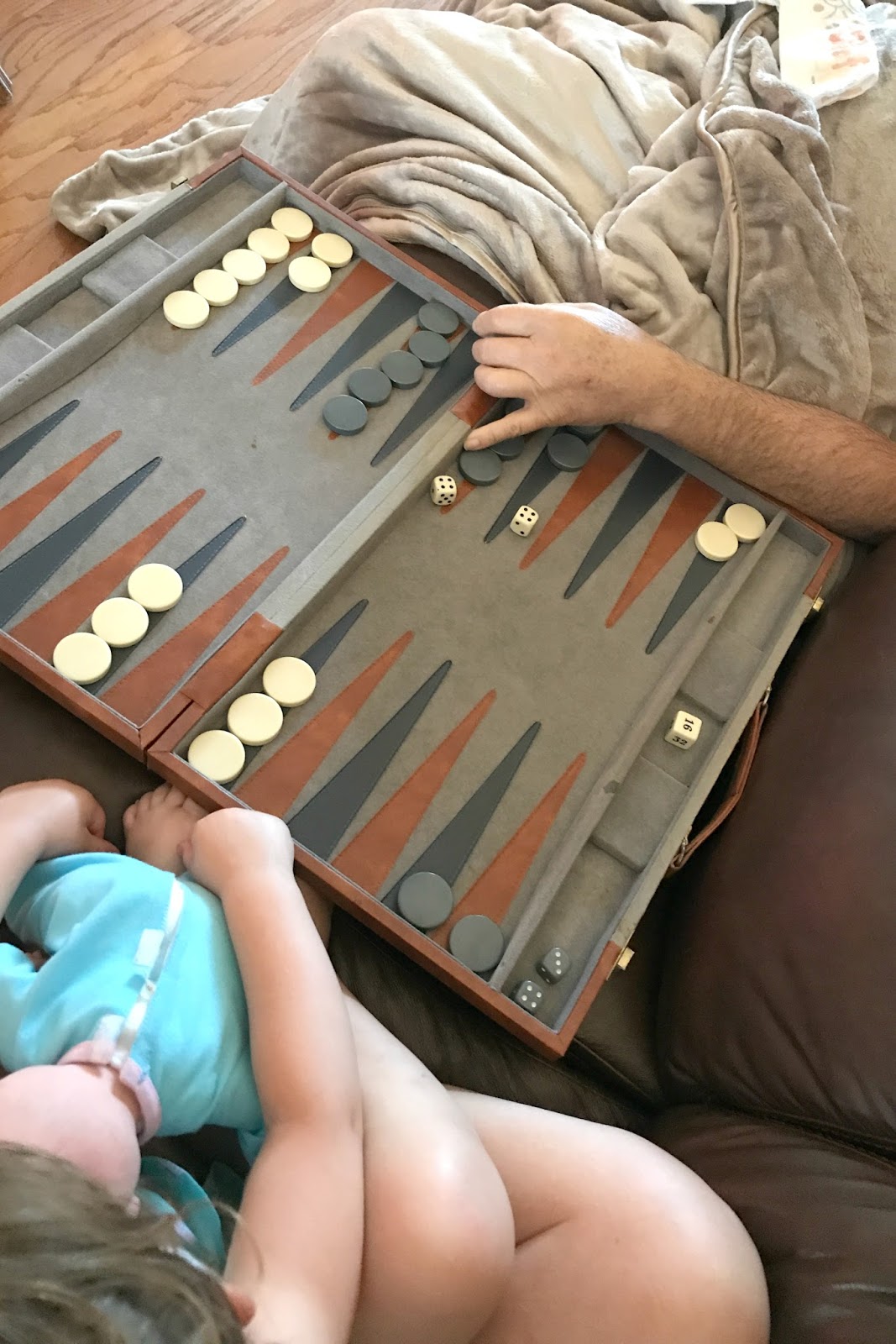 Saturday was a pretty tough day for dad. He was only able to get off the couch once and slept most of the day, but we still made the most of his waking hours with a game of backgammon, reading to Caroline and lots of TV. Caroline took the liberty of rolling the dice for both of us and I moved the checkers around for us. It was the slowest game of backgammon I’ve ever played but I didn’t mind because it was time with my dad well spent! 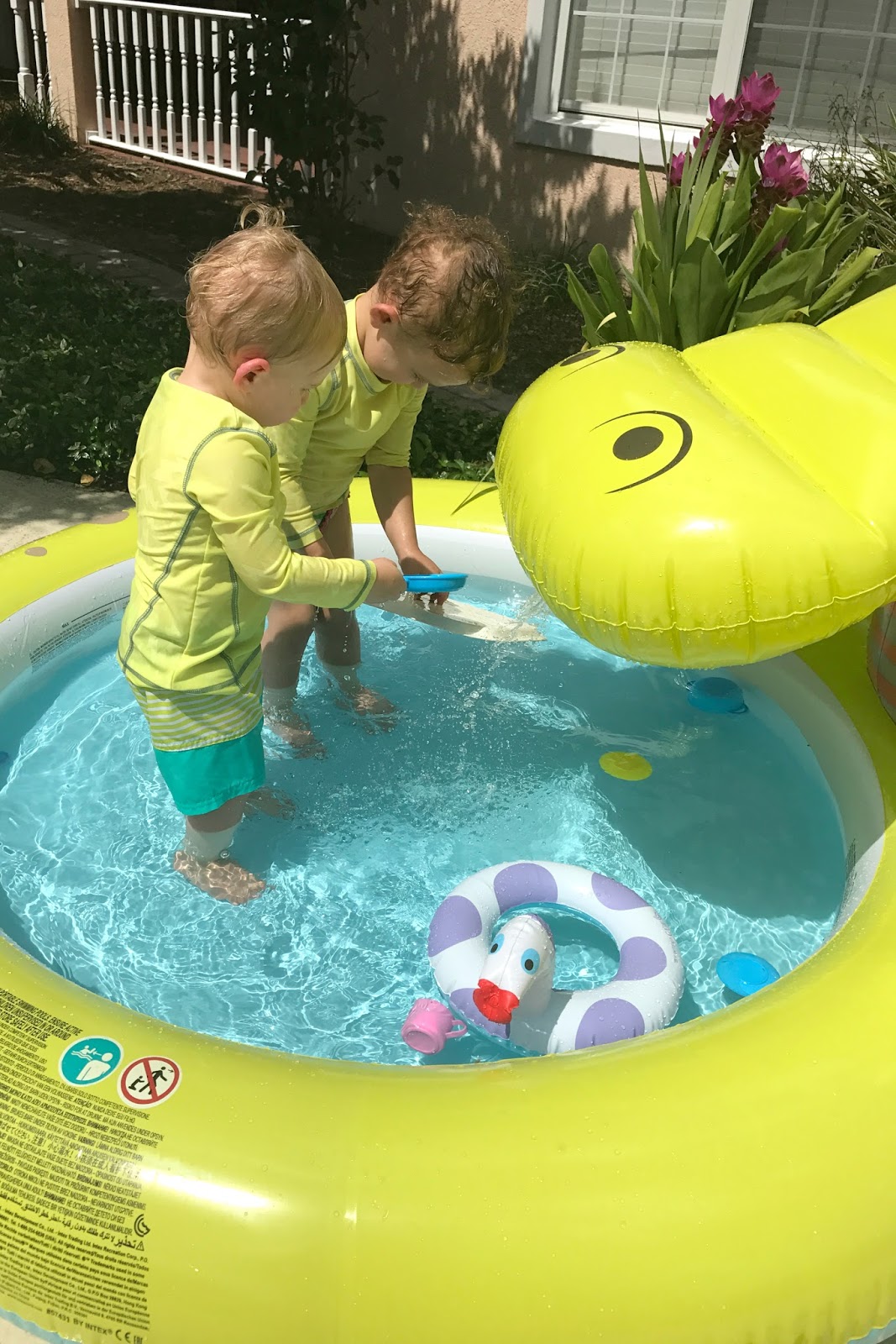 Once dad dozed off Lindsey and I suited up and played in the pool. Well, by the pool I guess. I swear I kept seeing Thomas every time Jackson would run by. ALSO — a ginormous shout out to Ryan for always tackling the worst job ever of blowing up the pool and breaking it down afterwards (and without complaint)! He’s pretty great! 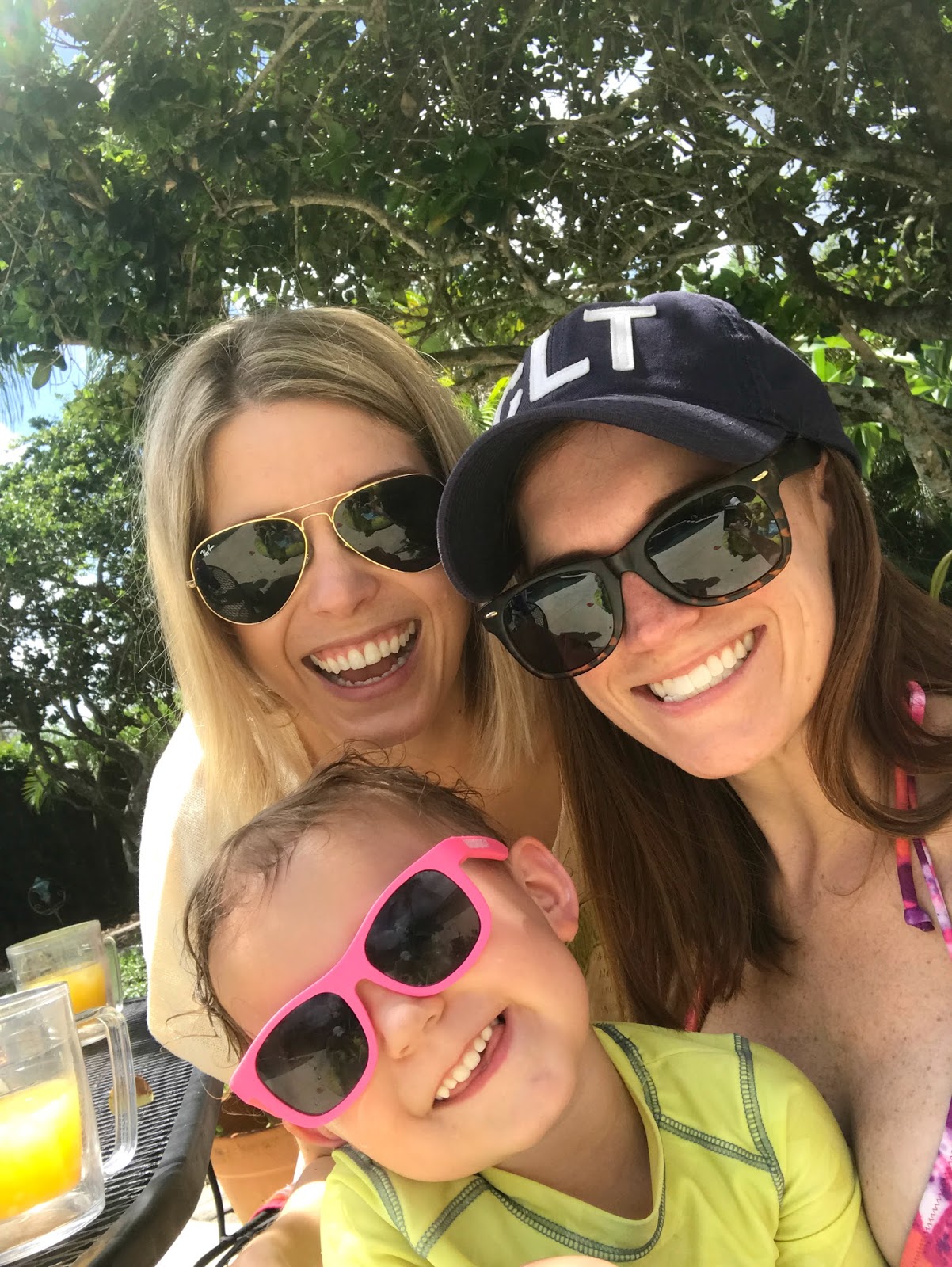 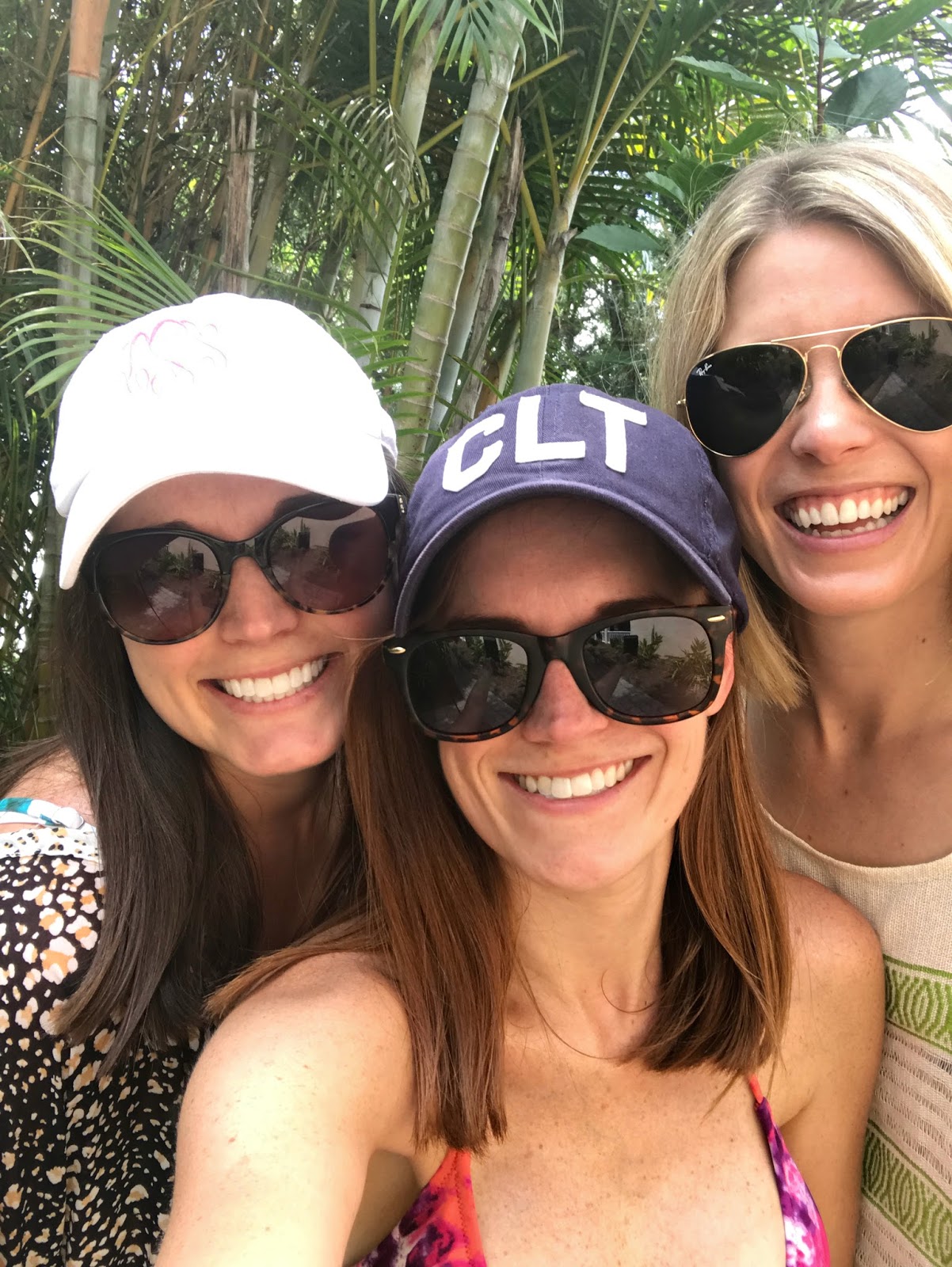 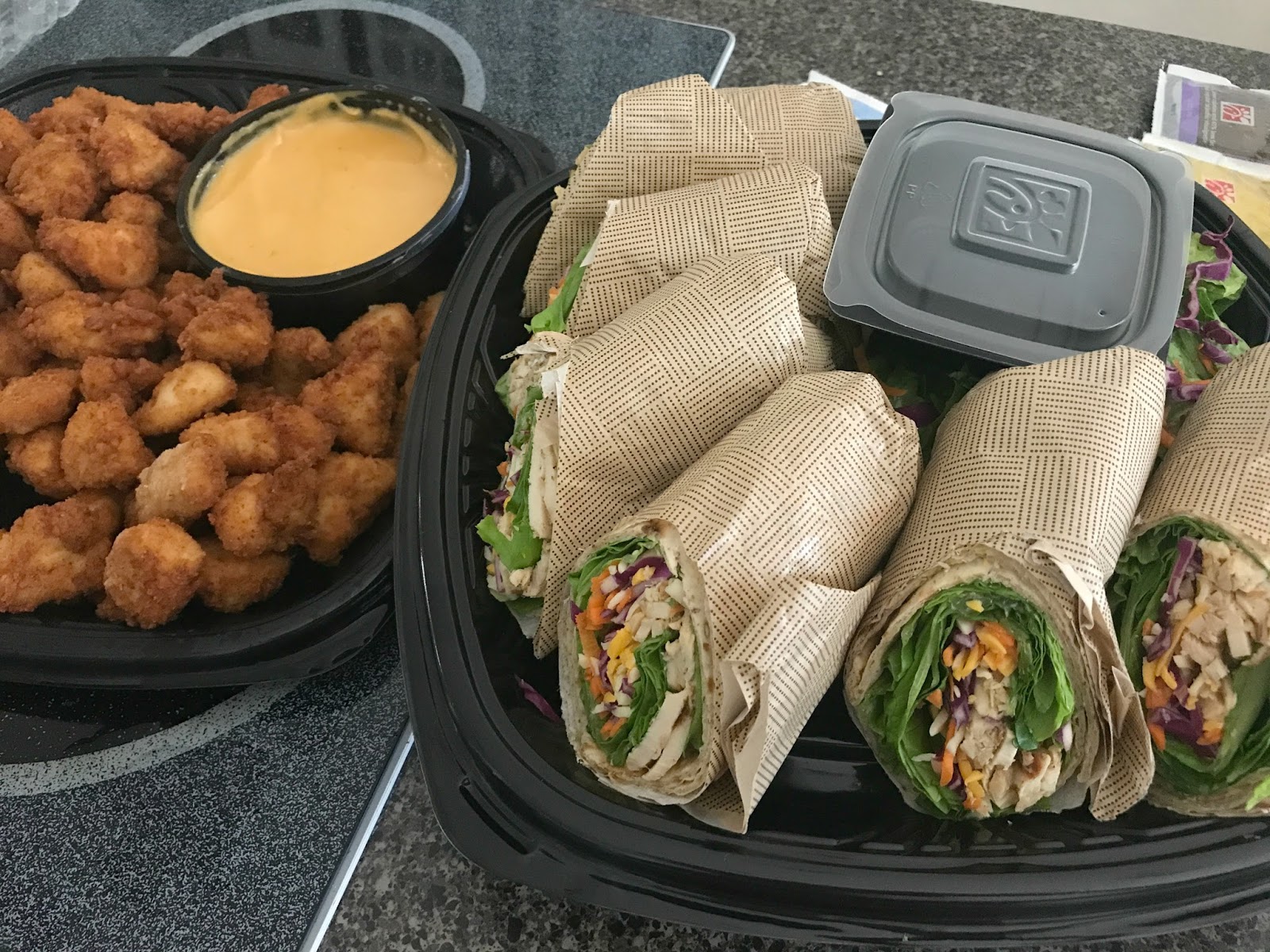 Later that morning my best friend May came over and surprised my family with lunch from Chick-fil-A and mimosas. If that’s not the bestest friend ever, then I don’t know what is!

Later in the afternoon my other best friend Shannon stopped by too! I am seriously SO grateful for my Orlando girls. These long time friendships have been such a blessing to me and it means the absolute WORLD to me that I can text them the day I arrive to town and they will drop everything to come spend time with me…and they know and love my dad and family so well! 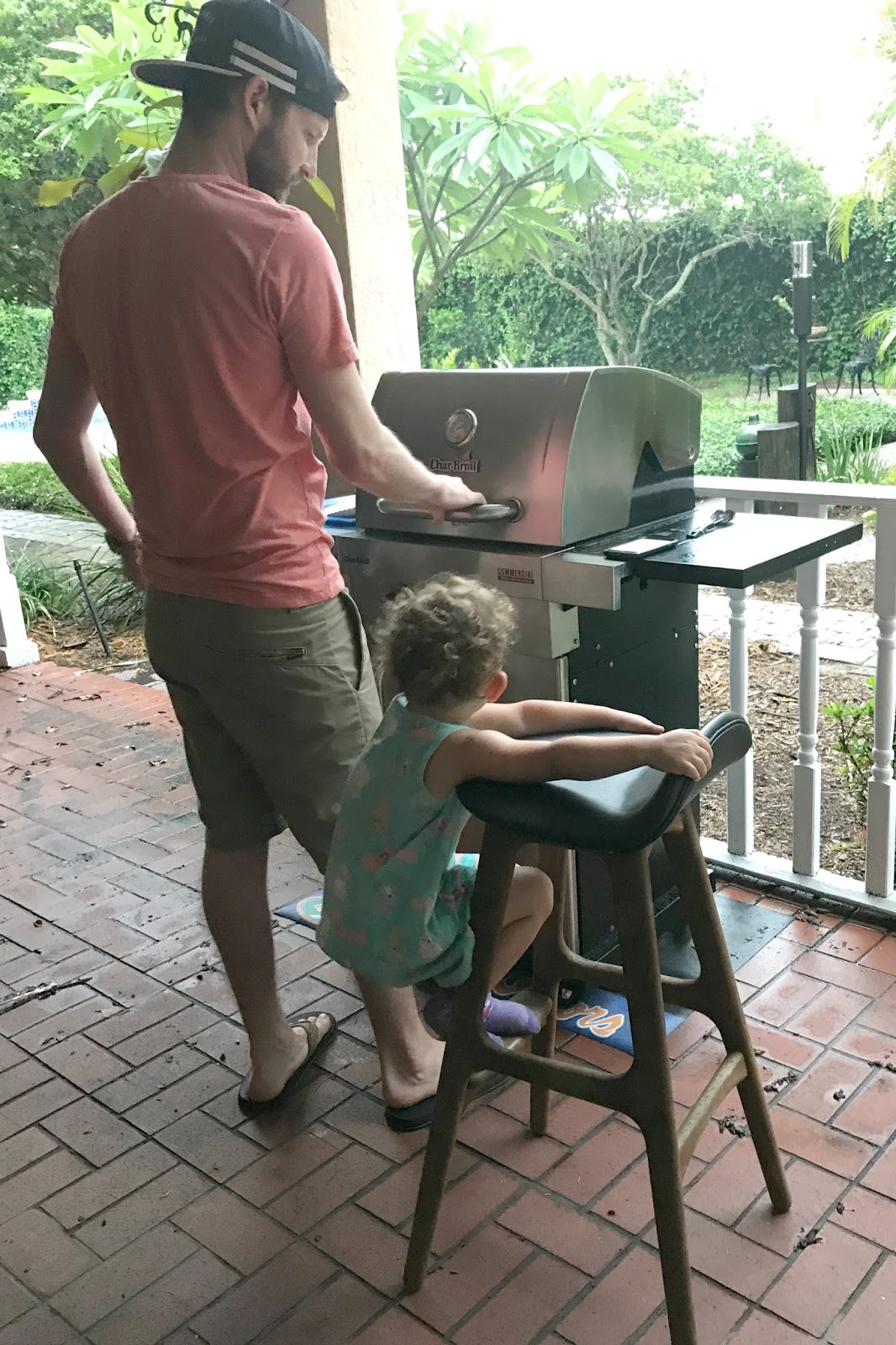 The toughest part of the weekend for me was Saturday Steak Night. It was the first time in my life that I ate a steak at my house on a Saturday night that my dad didn’t cook. Ian was awesome to step in (big shoes to fill) and grill the steaks — and they were great! But it just wasn’t the same for me and it made me incredibly sad. Like, INCREDIBLY sad. 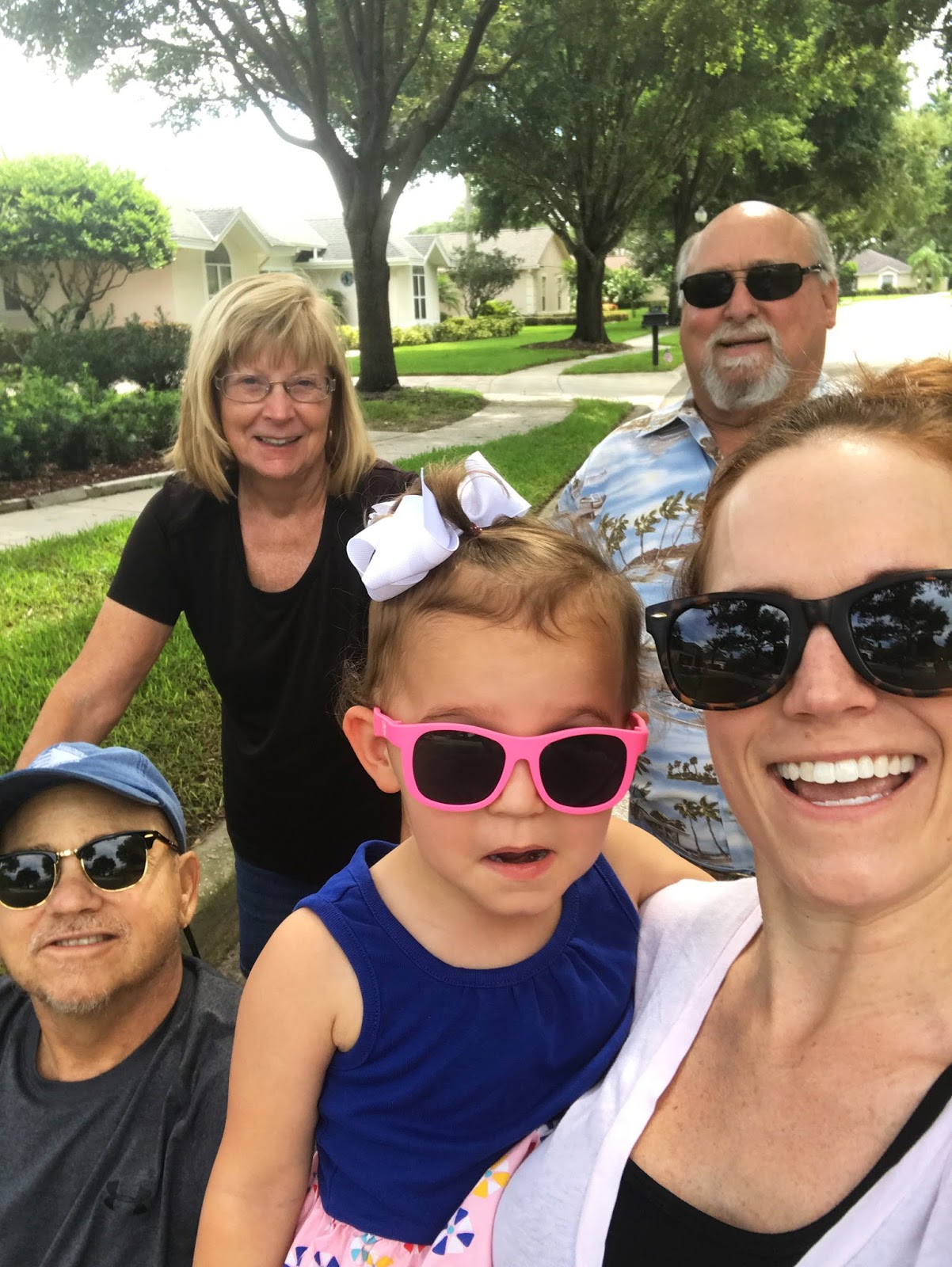 On Sunday we had plans to admit dad to the hospital but to our surprise he seemed to be doing a bit better so we kept him home with us. He even agreed to a walk (or I guess a roll for him) around the neighborhood! It was awesome to get him off the couch for a bit and Uncle Nick joined us for the family stroll too. 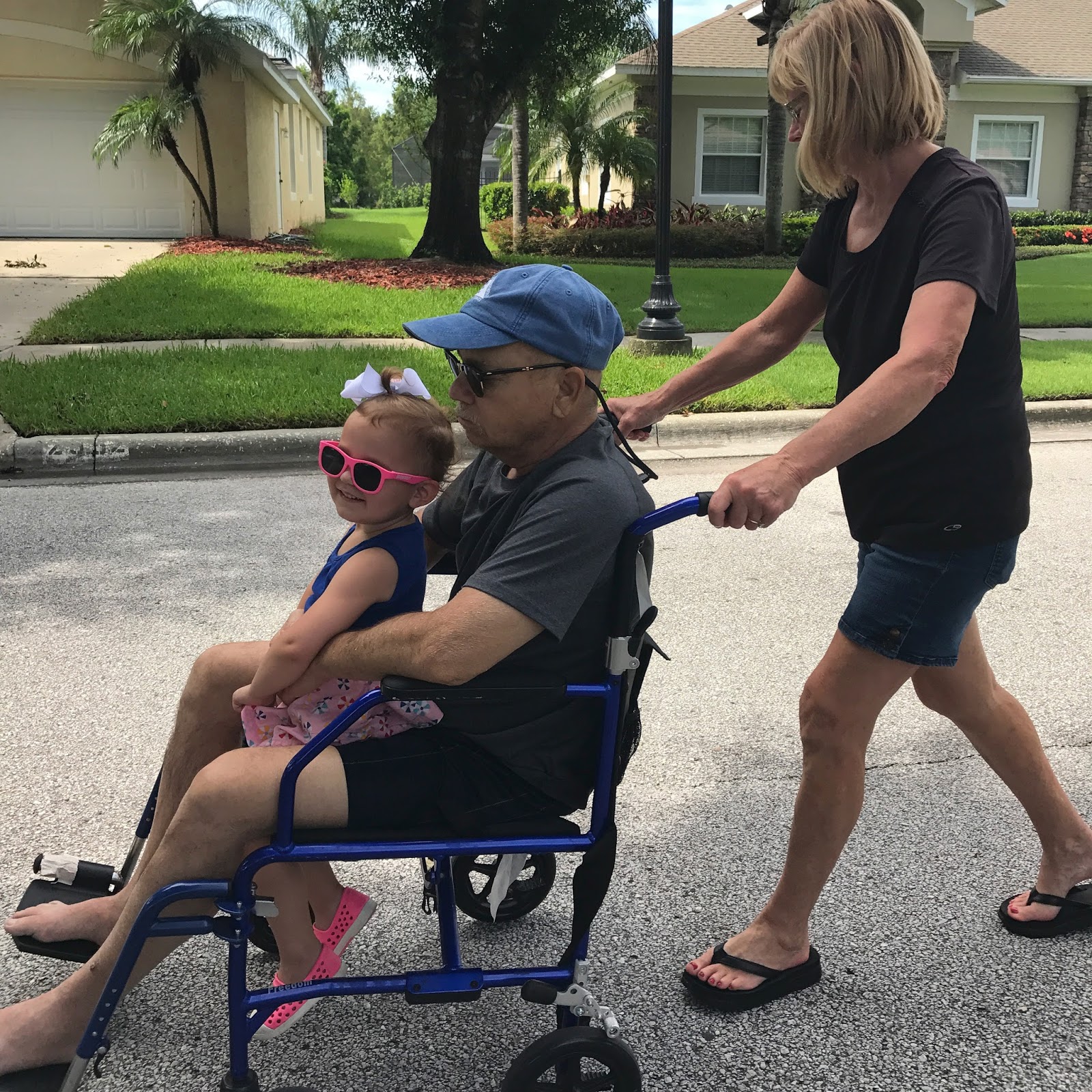 We flew out that afternoon. It was a terrible goodbye for me but we are making plans to return soon which always helps a little. Overall, I am just SO thankful to have had this time with my family and my dad this weekend. It was good for everyone!