It is so surreal to me that I am starting my weekly pregnancy surveys! Somebody pinch me! The love we’ve received from friends and family since our announcement has totally filled my heart with joy. We couldn’t be happier to celebrate these next 36ish weeks, but we really know that the best part comes in May! So here we go, Baby M’s 12 week survey! 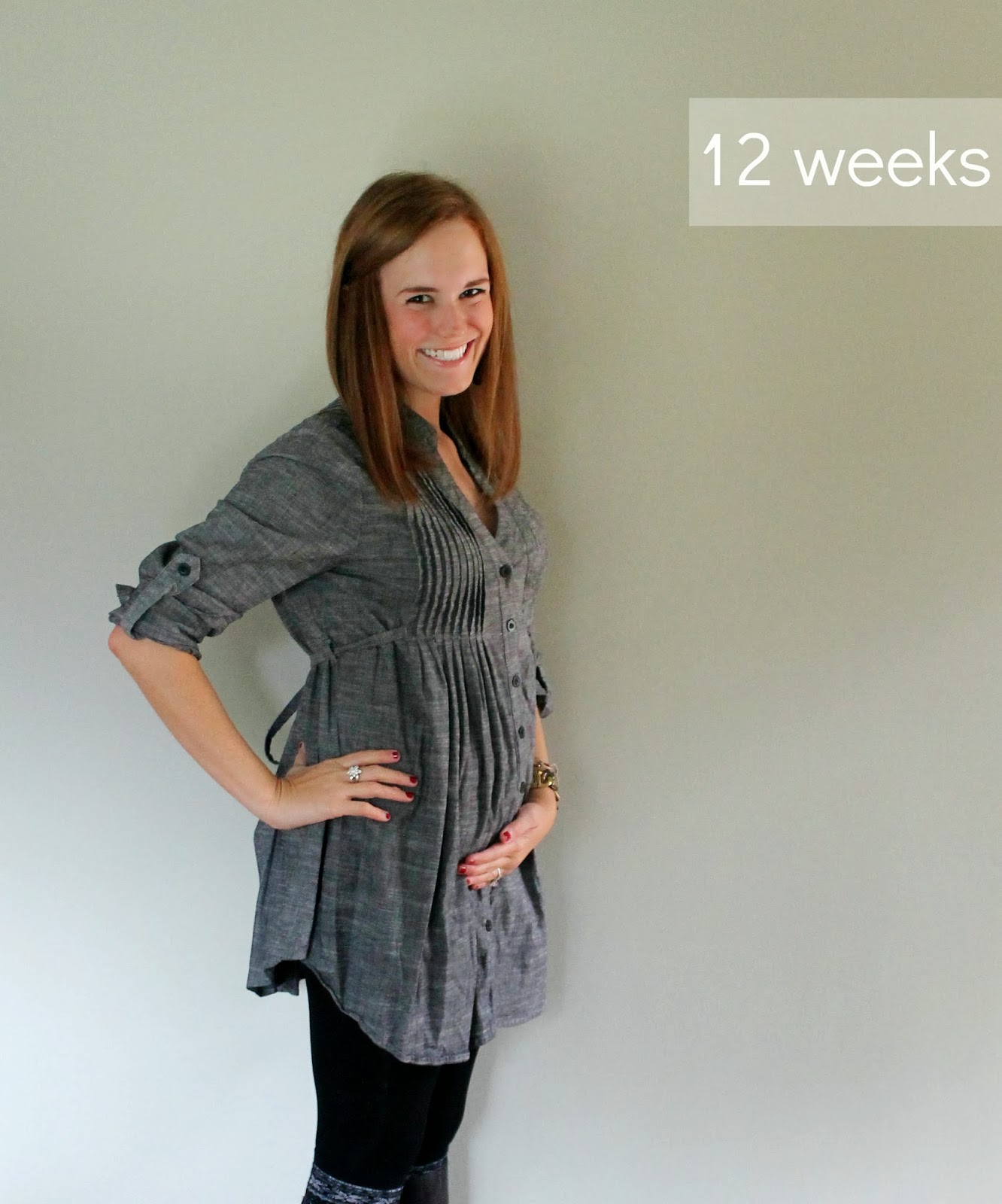 Baby Size: According to my What to Expect app, the babe is a full half-ounce and is the size of a large plum. And we found out at last week’s appointment that the babe has a healthy heartbeat of 170 bpm!

Weight gain: Before our Mexico trip in August I went on a strict salt-free diet and was regularly hitting the gym, so I was able to drop 6 pounds in 5 weeks, coming in at 108 lbs. Since then, I’ve gained 3.5 pounds.

Maternity clothes: Although all the books say to hold off on maternity clothes as long as possible, I just couldn’t wait to make my first purchase. So even though I don’t need them quite yet, I bought a pair of maternity jeans from Destination Maternity. And while I was there, I played with the fake bump in the dressing room for way too long. I’ve also started using black and white Baby Be Mine Maternity Belly Bands since my pants no longer button!

Stretch marks: No sign of these yet, but something tells me I should be as proactive as possible so I purchased some Mama Bees Belly Butter.

Sleep: Well, bedtime is more like 8:30 p.m. these days because I come home from work absolutely exhausted and all I can think about is sleep! And as soon as we found out I was preggo I purchased the Leachco Snoogle Pregnancy Pillow and am obsessed (and I think Matt is too)! I’ve caught the hubs several times trying to cuddle the other side of my pillow in the middle of the night. He’s a fan.

Best moment this week: Having my sister in town and cheering on our husbands at the BBQ competition. One of my more serious cravings is MEAT, but not chicken. Pre-pregnancy, I was 95% vegetarian {5% chicken}, but now all I can think about is BBQ, hamburgers, etc., so being at a BBQ festival all weekend long was heaven!

Looking forward to: A nice relaxing weekend! We’ve been so busy the past few weekends that it will be nice to slow down and knock some stuff off of my “to do” list (liiiike make my Halloween costume).

What I miss: My energy! It’s slowly coming back thankfully! Believe it or not, I haven’t missed wine or pumpkin beer which I thought I would. Before going public, I was drinking Ariel Dealcoholized Wine during girl’s wine nights and thought it tasted great! I just poured it into a screw top white wine bottle and no one ever suspected a thing!

Movement: Not for awhile although at our last ultrasound our babe was bouncing around like crazy!!

Food cravings: Carbs, carbs and more carbs. I am crazy for pastas, sandwiches, bagels, potatoes, etc. More specifically, blueberry bagels and orange juice! And of course, as I mentioned, MEAT!

Anything making you queasy or sick: For awhile I couldn’t do coffee, but this week was the first week I could tolerate it again. And don’t even think about putting me anywhere near chicken. Gross. Ew. Can’t even talk about it, moving on…

Gender: Yes, we plan to find out as soon as possible! I really thought we were having a girl until I read that meat cravings are indicative of a BOY! We will be ecstatic either way!

Labor Signs: Will start answering this in about 28 weeks…

Symptoms: Most of the crazy symptoms have gone away! However, I am thirsty and hungry all the time!


Belly Button in or out? In

Wedding rings on or off? On

Mood: Happy, happy, happy! I haven’t really had any crazy mood swings or anything yet. Fingers crossed I don’t turn into a crazy person for a little while longer.

Nursery: We will start on nursery progress immediately after Thanksgiving. We are hosting Thanksgiving this year so we don’t want to flip our guest room quite yet!


Workouts: I am finally back to the gym after an 8 week hiatus. I am hitting the gym 4 days a week right now and it feels great!


Dear Lord, this is a special week for my baby. It’s the last week of the first trimester and the week in which his digestive system is beginning to develop. Please help my baby develop a strong, healthy system that works in perfect order. This week I also pray for Your hand in giving my baby a compassionate heart and to love others like you do. Give my child a Christlike attitude toward his family and everyone he meets. In Jesus’ name I pray. Amen.