On Monday morning we had our two month checkup for Thomas. Coffee in hand, we arrived 5 minutes early in hopes for a quick visit so we could hit up Marshalls before the next feeding. Within a few minutes we were whisked back to the exam room, interrogated with all the routine questions, measurements were recorded (10.5 lbs, 22 inches long) and we patiently awaited our pediatrician. This visit was going down as the quickest checkup yet. Our doctor arrived and asked us if we had any questions or concerns. We didn’t. So he got started on his quick physical exam.

During the routine eye exam we commented on how Thomas has “pretty” white pupils – very unique! Upon closer look, our doctor agreed and spent a few extra minutes examining them with his penlight. He gave a confused hum and asked us if we had any concerns about Thomas’ vision. We said no but noted that Thomas doesn’t make long periods of eye contact and is mostly interested in lights. We equated that to him being so little still. The doctor then made up a bogus excuse about his lens being a little dirty and promptly exited the exam room to get “his backup lens.” We started to panic. A few seconds later he reentered the room with an exam tool that was about eight times scarier looking than the original one. He said he couldn’t find his backup lens so he just grabbed this one. That’s when Matt and I realized something was definitely up. He turned the lights on and off, on and off, on and off. We sat in complete silence. I began to shake. At the conclusion of his extended exam the doctor announced he wanted to err on the side of caution and have an ophthalmologist give a second opinion. He speculated the white pupil could be an indicator of a variety of very serious things from cataracts to eye cancer. Cancer?! Cancer?!! We politely refused to leave until the first available referral appointment had been confirmed…1 p.m. across town.

During the car ride home I had such an intense panic attack through sobs of tears that Matt had to pull over and help me breathe. The next few hours were a blur. We sat on our couch and prayed over Thomas.

At 1 p.m. we arrived at the Eye, Ear, Nose & Throat (EENT) doctor and tried to be patient as the nurse recorded all of our basic information. Once we were finally brought back to the exam room the doctor gave Thomas some drops to dilate his eyes. They burned and he screamed. Fifteen minutes later it was time to evaluate Thomas and it took a team effort to hold his eyes open for the doctor. Over high pitched screams she diagnosed him with cataracts in each eye and told us it was a very serious condition that needed immediate medical attention – surgery. She also informed us that she only had the capabilities to examine the front of his eye and wasn’t able to give us a progress report on the overall health of his eye and whether or not there were any cancer signs. Given the severity of the diagnosis, she immediately sent us back across town to another EENT for an ultrasound and second opinion by a doctor who specializes in pediatric cataracts.

This was turning out to be the longest, worse, scariest, most exhausting day ever. I kept wondering if this was actually real life or if I would wake up from this terrible nightmare to my perfectly healthy baby.

After a lengthy wait we were finally called back and given another eye exam by the ophthalmologist. Right away he agreed Thomas has congenital cataracts in both eyes. Upon further review, the doctor also informed us that his eyes otherwise look healthy and there was no concern of cancer – HUGE SIGH OF RELIEF. But it turns out that cataracts isn’t much better news.


Over the next hour we peppered the doctor with questions and learned:

–  A congenital cataract is a clouding of the lens of the eye that is present at birth.


– They are super serious and extremely rare. Only about .4 percent of infants are born with a cataract in one eye…and here we are, congenital cataracts in BOTH eyes. The cause is unknown.

– Thomas has the most severe case of cataracts which requires immediate surgery to ensure that his vision is clear enough to allow normal development of his vision system. So the longer we wait, the less likely his vision will be restored after surgery.


– We are working to schedule the surgeries for this week or next. Each eye has to be done separately, about 7-10 days apart.


– After surgery Thomas will have to wear baby contacts. Apparently this will be a huge hurdle for us to safely insert and remove these. We will also have to administer eye drops several times a day. Once he is older he can switch to bifocal glasses. Then eventually, at a much later age he may be eligible to have a permanent lens implanted behind his eye.

– With the surgery comes a 40% risk of glaucoma due to the high eye pressure and lots of other secondary risks.


– As of right now we do not know how much Thomas can see. We believe he can see bright lights and shadows. After the surgery we still won’t know how much he’ll be able to see. It won’t be until he can read an eye chart that we’ll have more information.


– For the next seven years Thomas will have to be closely monitored and treated by an ophthalmologist with monthly visits. His vision may increase or decrease with time but we just don’t know.

So that’s where we are at. Our doctor recommended we join a support group to learn more about this disability we’re facing and talk with other families with children who have cataracts. We know Thomas will have lots of challenges ahead and many obstacles to overcome. The doctor says “he has a shot at a good life” but won’t be able to play certain sports like golf, will constantly be at risk for severe side affects from surgery at a young age, may not be able to drive and more.

We are still taking it all in and are trying to stay positive. Please pray for Thomas. Please. And check your baby’s eyes! 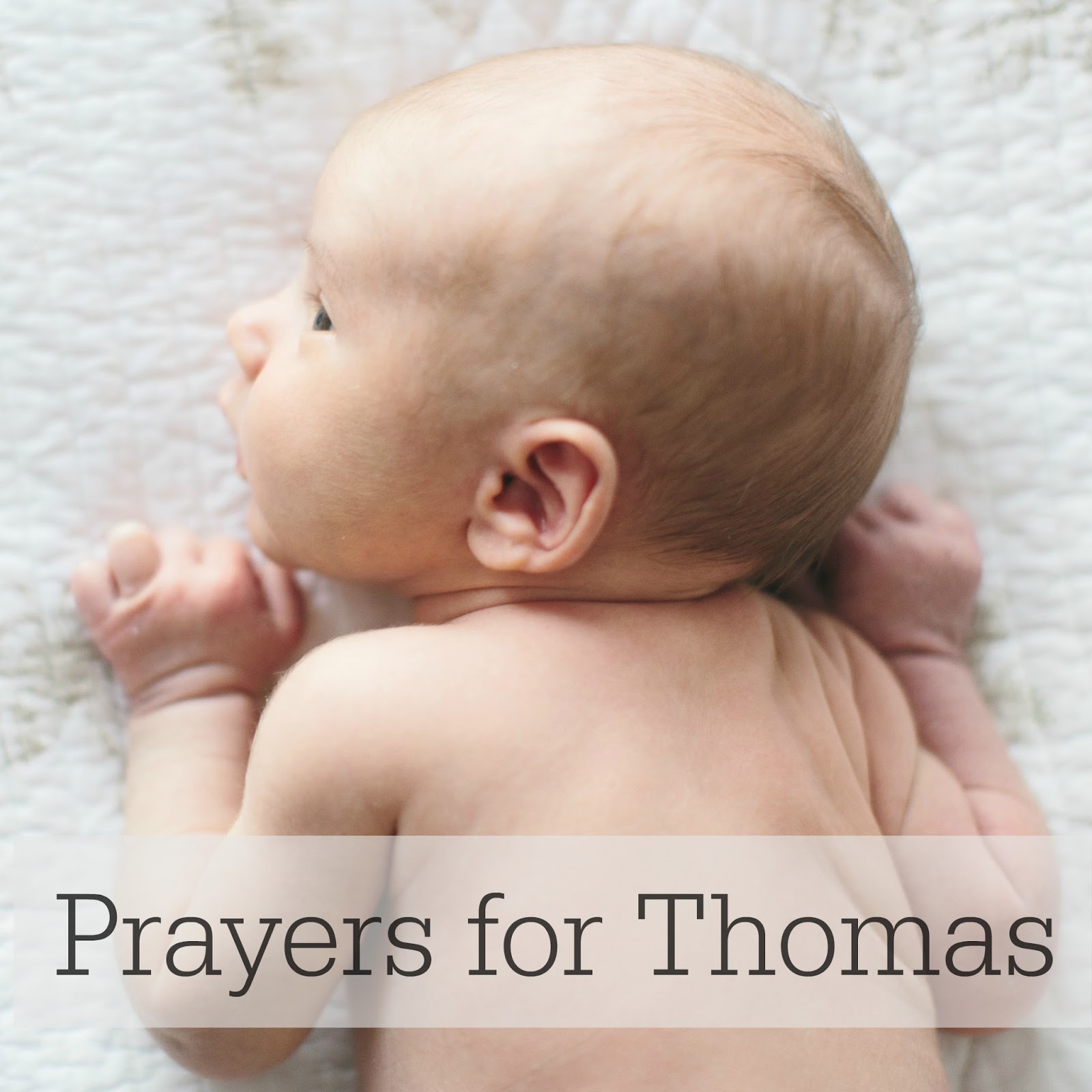