We officially survived the first week as a family of four and Matt returned to work yesterday. By day it’s been absolutely wonderful, by night it’s been exhausting and terrible. Even though we just did this 14 months ago, I think I blocked out how awful the first few weeks are at night time. However, the moments that all four of us are snuggled up asleep together in our shrinking king sized bed, my mama heart could burst and the hard times are trumped a thousand times over with happiness. My life has never felt more full. 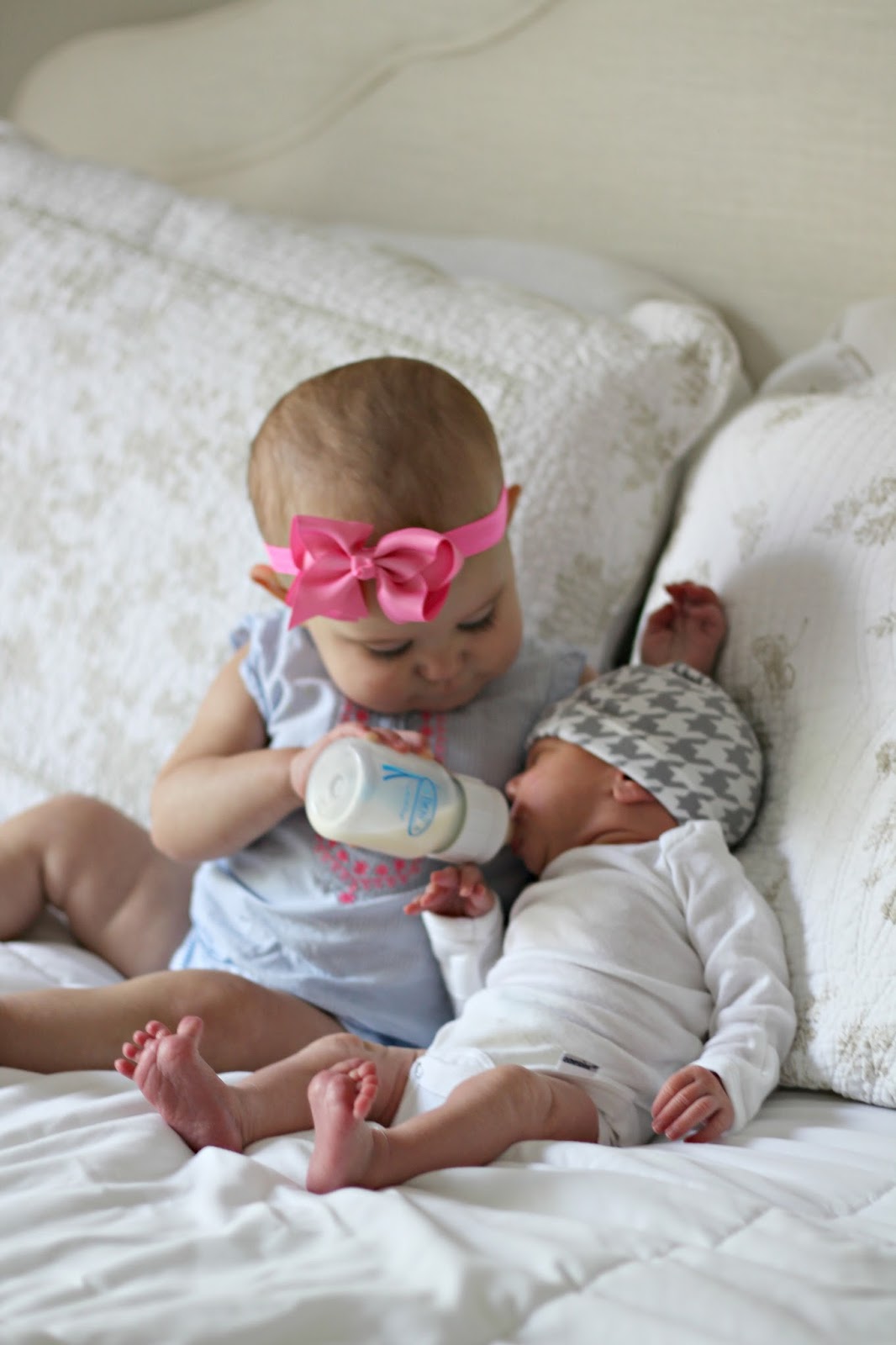 Now that Thomas has officially joined our family outside of my uterus we have been in euphoria (combined with delirium) to have the whole family together after a long 9 months. I wasn’t sure I could love another baby as much as I love Caroline but the second Thomas was placed in my arms at the hospital we were immediately fused at the heart. It wasn’t until that moment that I realized my love is exponential and cannot be contained. In an instant I learned my heart was made to expand over and over and over.

We returned home from the hospital Sunday afternoon, kept Caroline home from daycare on Monday so she could spend time with her new brother and resumed her normal schedule on Tuesday. So most of last week it was just Thomas, Matt and me…and it was amazing. We would take turns letting Thomas nap on our chests and overall he is super easy to care for – eat, sleep, diaper change, repeat. We also took full advantage of having one sleepy babe and patio hopped at our favorite lunch spots (Bad Daddy’s, Room 112, Pizza Peel and Tupelo Honey), binge watched Parenthood and enjoyed many uninterrupted conversations. Thomas is a totally different baby than Caroline. Or maybe I’m just less stressed this time around? Regardless, he is a great baby, rarely cries, rides peacefully in his car seat, doesn’t mind all of the pink hand-me-downs and is super laid back. He takes head pats, sloppy kisses, eye pokes and aggressive hugs from his big sis like a champ too. 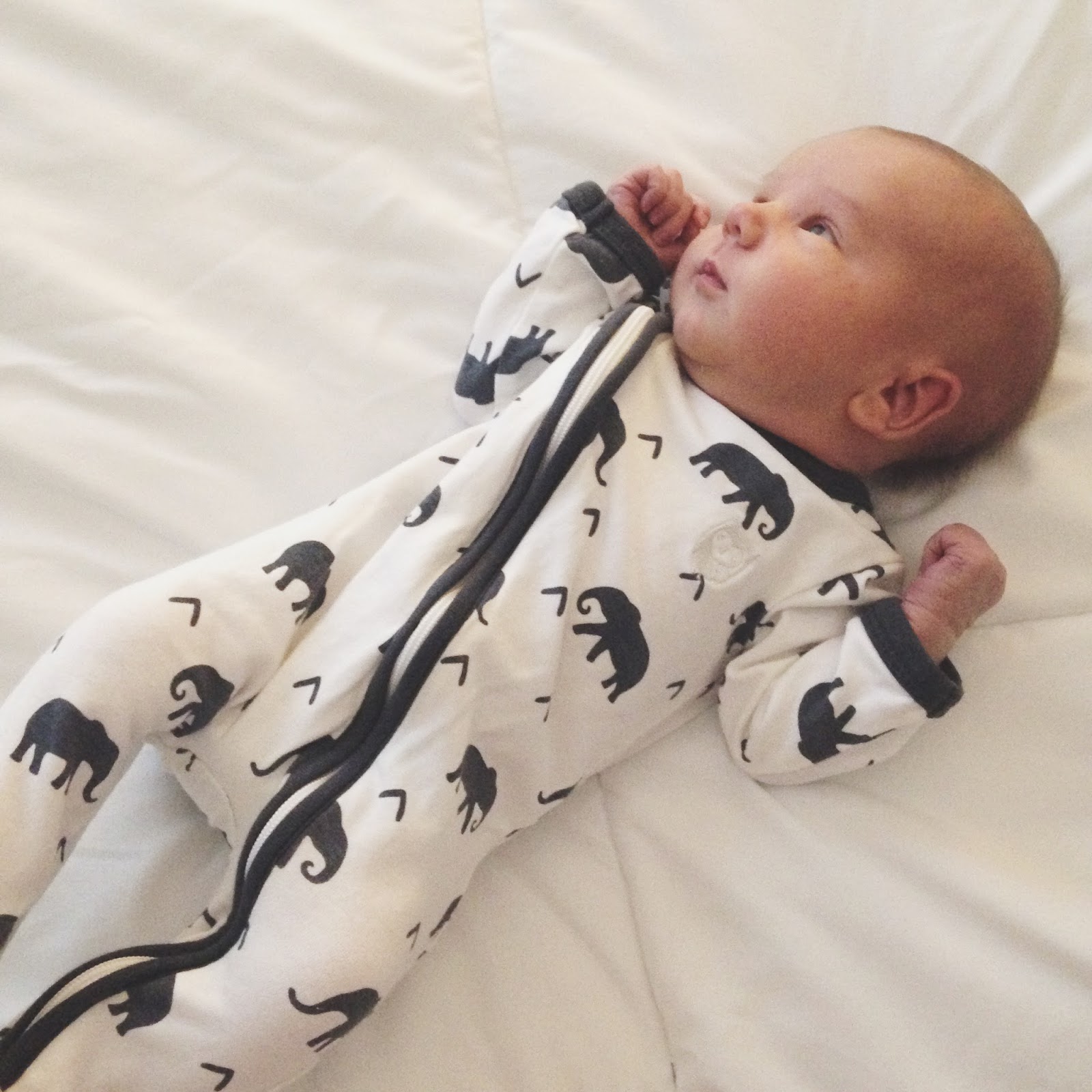 The absolute worst part. And I am a huge baby when it comes to sleep deprivation. Nights straight up suck right now and I am counting down the days to begin sleep training. Since
bringing Thomas home from the hospital, I have learned that his most peaceful 16-18 hours of sleep are during my waking hours of course. By 10 pm he’s wide-eyed, staring at me like the cutest little stalker and the second I even consider dozing off he holds my sweet dreams hostage…grunting, squirming and filling his diaper. Oh, and I cannot even begin to describe my SIDS paranoia this time around. Until his umbilical cord falls off we’ve had a hard time using the Snuza correctly and so we’ve had several false alarms. If he wasn’t up every 1.5 hours to feed we would have already transitioned him to the crib. But we certainly cannot risk that grenade going off in the nursery and having two babies up all night at this point. So in the meantime, with every noise he makes I blast the light on and practically dislodge our mattress from sprinting out of bed to the rock n’ play to make sure he’s breathing, only to wake him up and start the cycle all over again.

And for the record, yes, we’ve gone through our extensive collection of swaddles, pacifiers, white noise machines and every other baby sleep aid on the market. We just have to suck it up…or fork over our savings for a night nurse (in my wildest dreams). I keep telling myself over and over again that this is temporary and will eventually pass but damn, it’s hard.

Side note – hubby shout out: I am so very lucky that Matt is a huge help and shares the load very evenly so I can get short bursts of precious, partially restorative sleep. He rocks. Seriously. I don’t know what I’d do without him. After his night shift he rolls out of bed, washes bottles, gets Caroline dressed, fed and drops her off at daycare. And just like last maternity leave, on his way in to the office he stops by the house to drop off a cup of piping hot coffee to me. I know, I won the husband lottery.

Like last time, I’m not excelling in the milk factory department of motherhood. From day one our feeding schedule looks a little like this –  every 1.5 to 2 hours around the clock, breastfeed each side 20-25 minutes each, then pump (with a hospital grade rental pump) for 20 minutes, feed back the .25 – 1 ounce of pumped milk, top off with formula if Thomas is still not full. Did you do that math? That’s about an HOUR worth of feeding work only to do it all over again about 30 minutes later. So yes, I hate feeding. Absolutely hate it. Dread it actually. I keep saying I’m going to throw in the towel and know that this part of motherhood will become so much more enjoyable once I actually do, but instead I find myself at reoccurring lactation consultations every other day out of mom guilt…

Navigating life with two babies is a huge adjustment. Our hands are now twice as full and we are in 100% survival mode at this point. Hats off to SAHM’s with two minis. Seriously. How do you do it, super mamas? How do you chase a toddler, tackle the pile of dirty dishes, grocery shop, fold baskets of laundry, change diapers (x2), prep toddler meals, wash bottles and spend time with your new baby? We’ve only had a handful of days with both kids at home together and Thomas spent most of that time either in swing or in the sling while we tended to our sassy toddler. Whoever cries the loudest gets priority.

That being said, we decided to resume Caroline’s normal daycare routine pretty quickly. She loves her friends, teachers and routine at school and I really want to give Thomas the same one-on-one time and undivided attention that she got to have during those first 12 weeks of life. However, the second she comes barreling through the front door she is on a mission to find her baby brother, waving and screaming “hiiiiiiii baaabyyyyyy!” over and over again until they are reunited. I love watching her give him a hug and kiss. There really is nothing more heartwarming than watching Caroline fall in love
with Thomas and, though she’s still in diapers herself, take on the
role of big sister and protector. 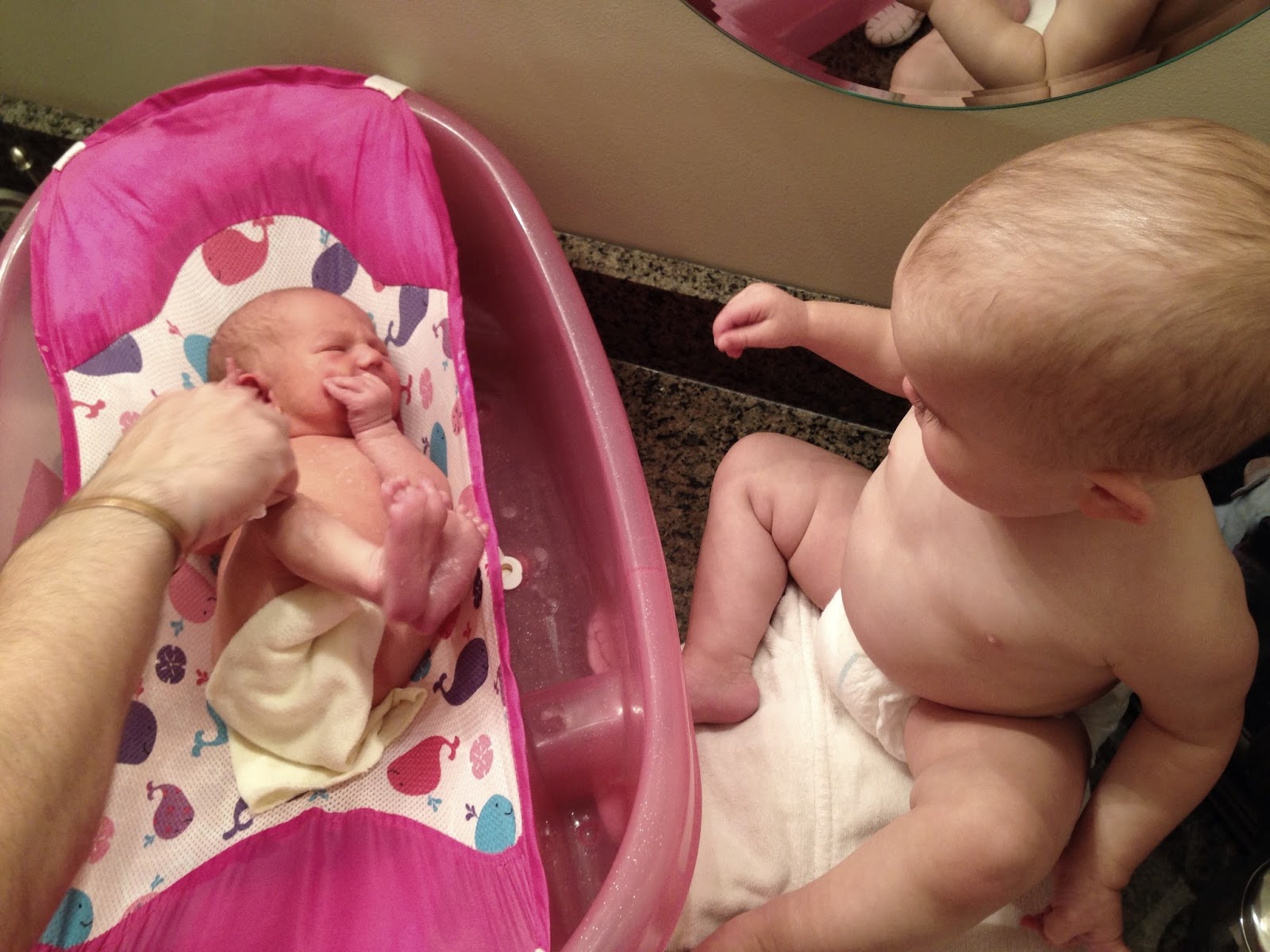 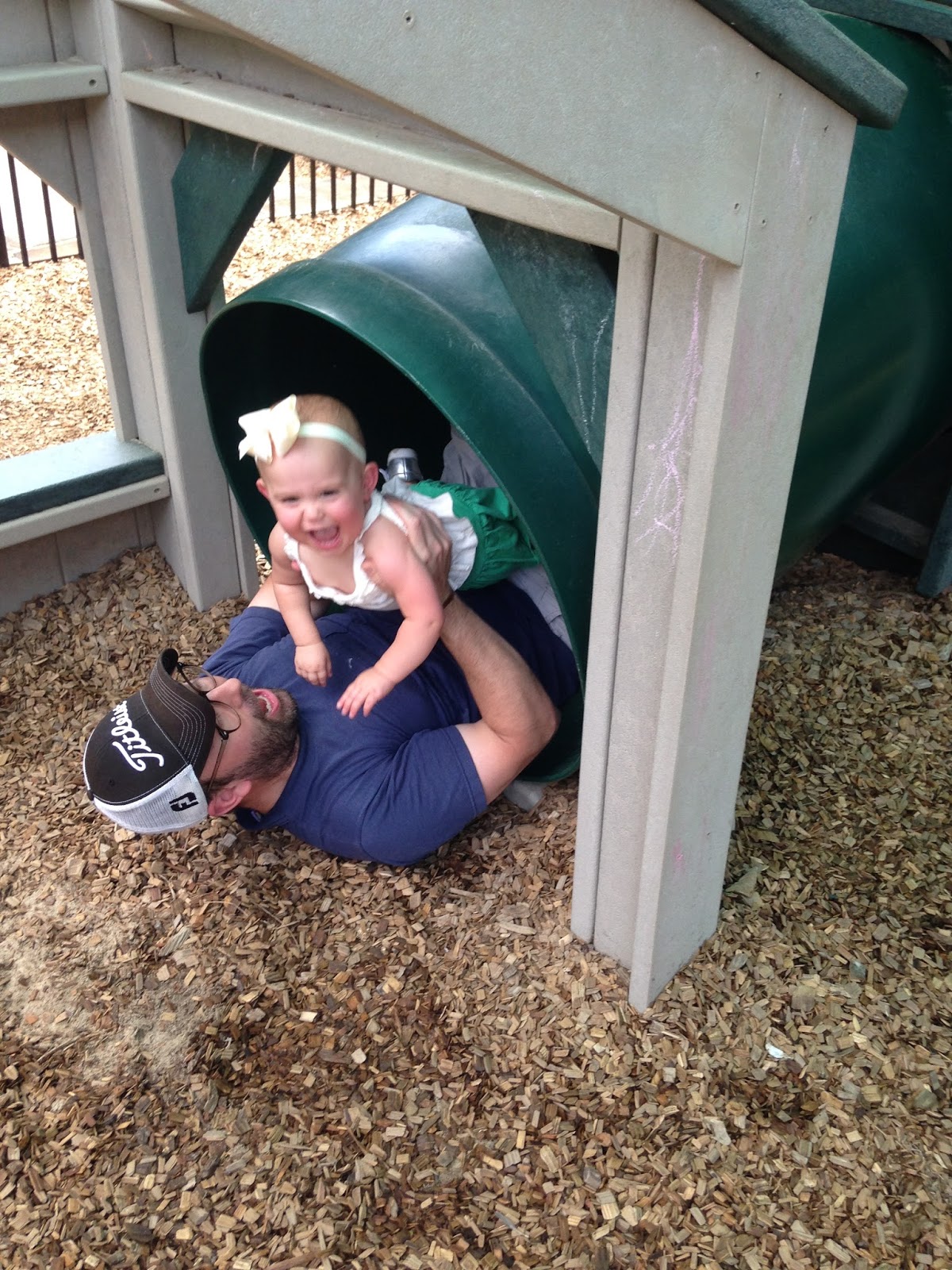 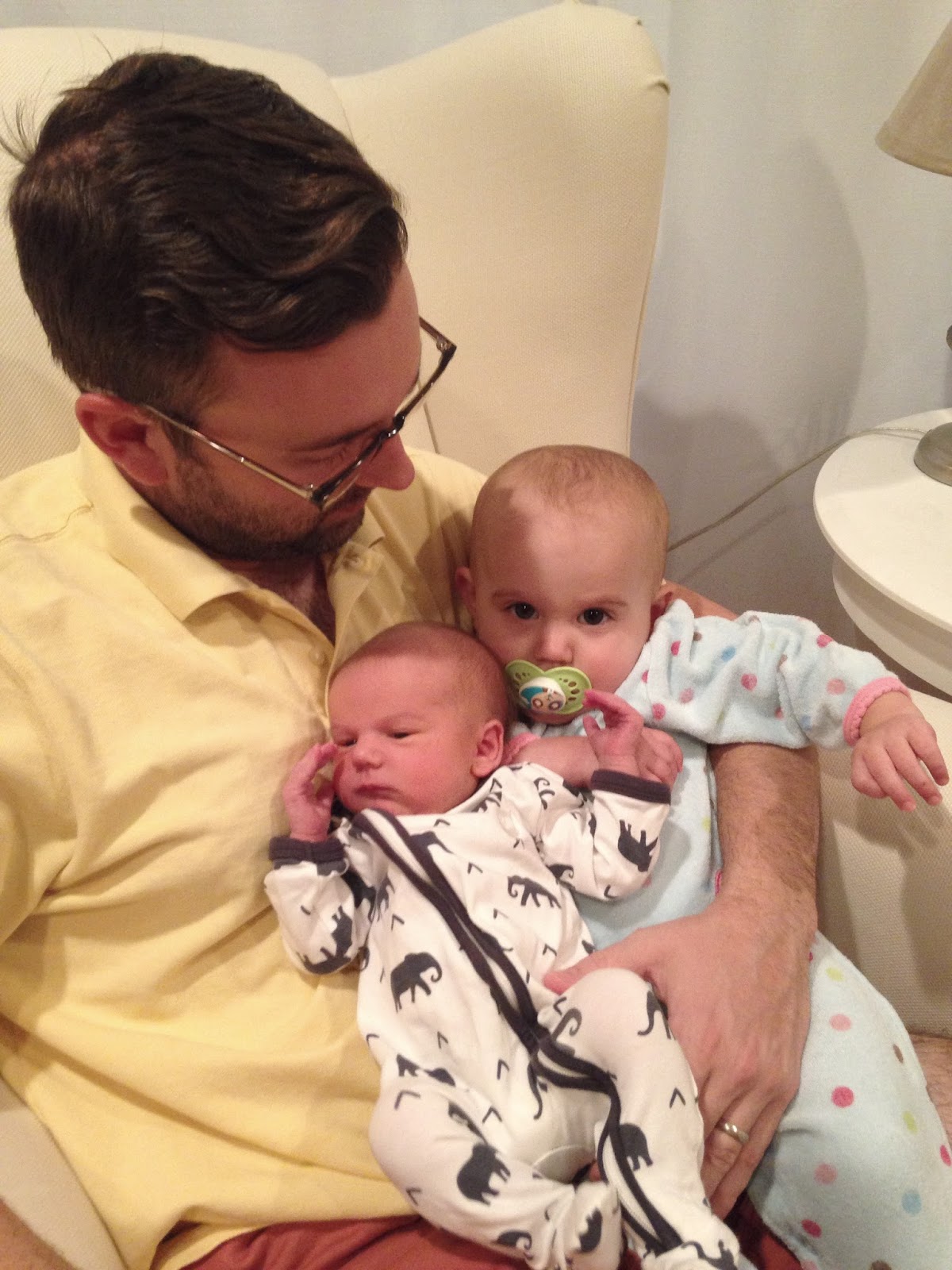 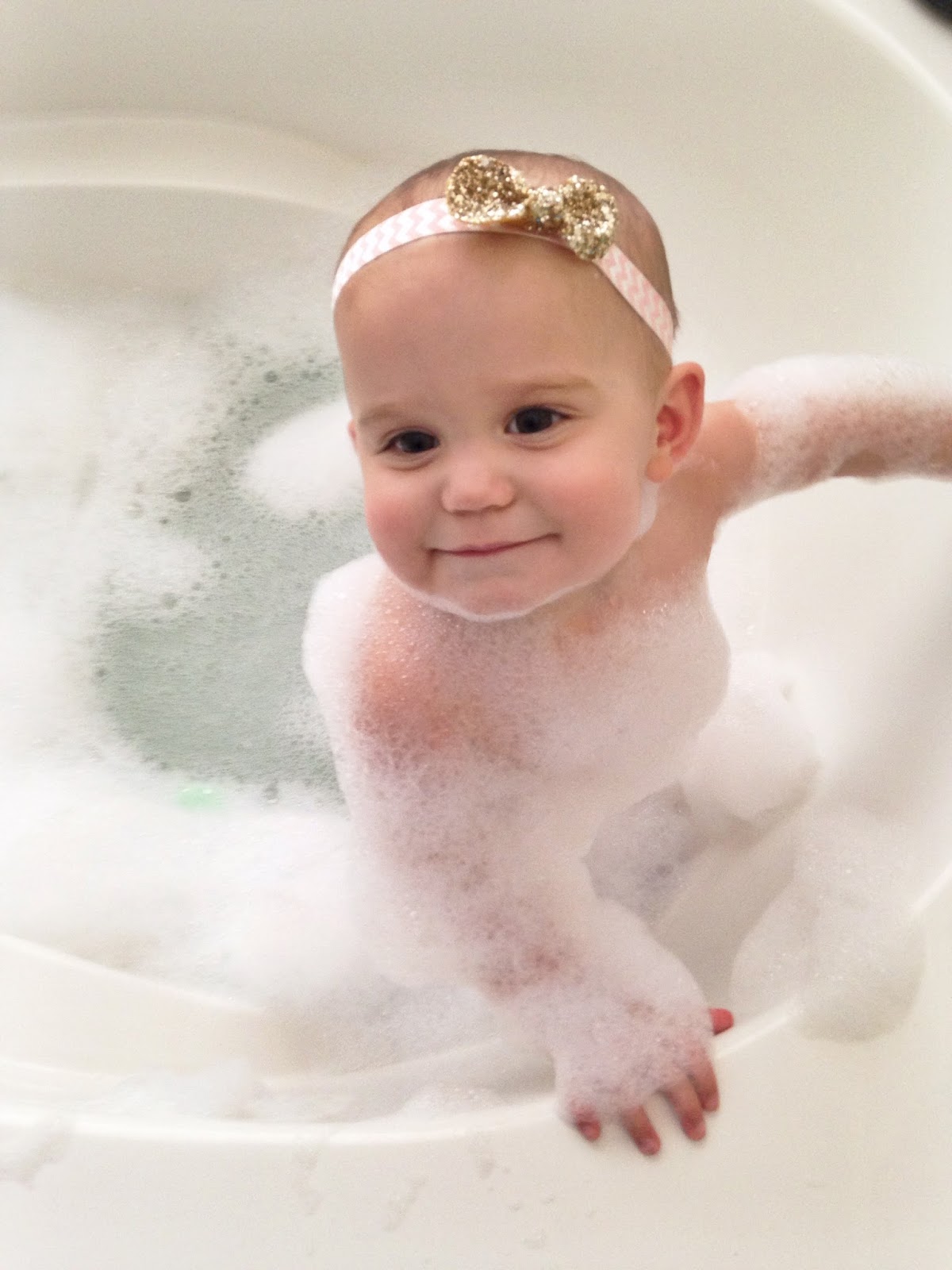 The second Thomas starts crying Caroline freaks out and comes running for us. 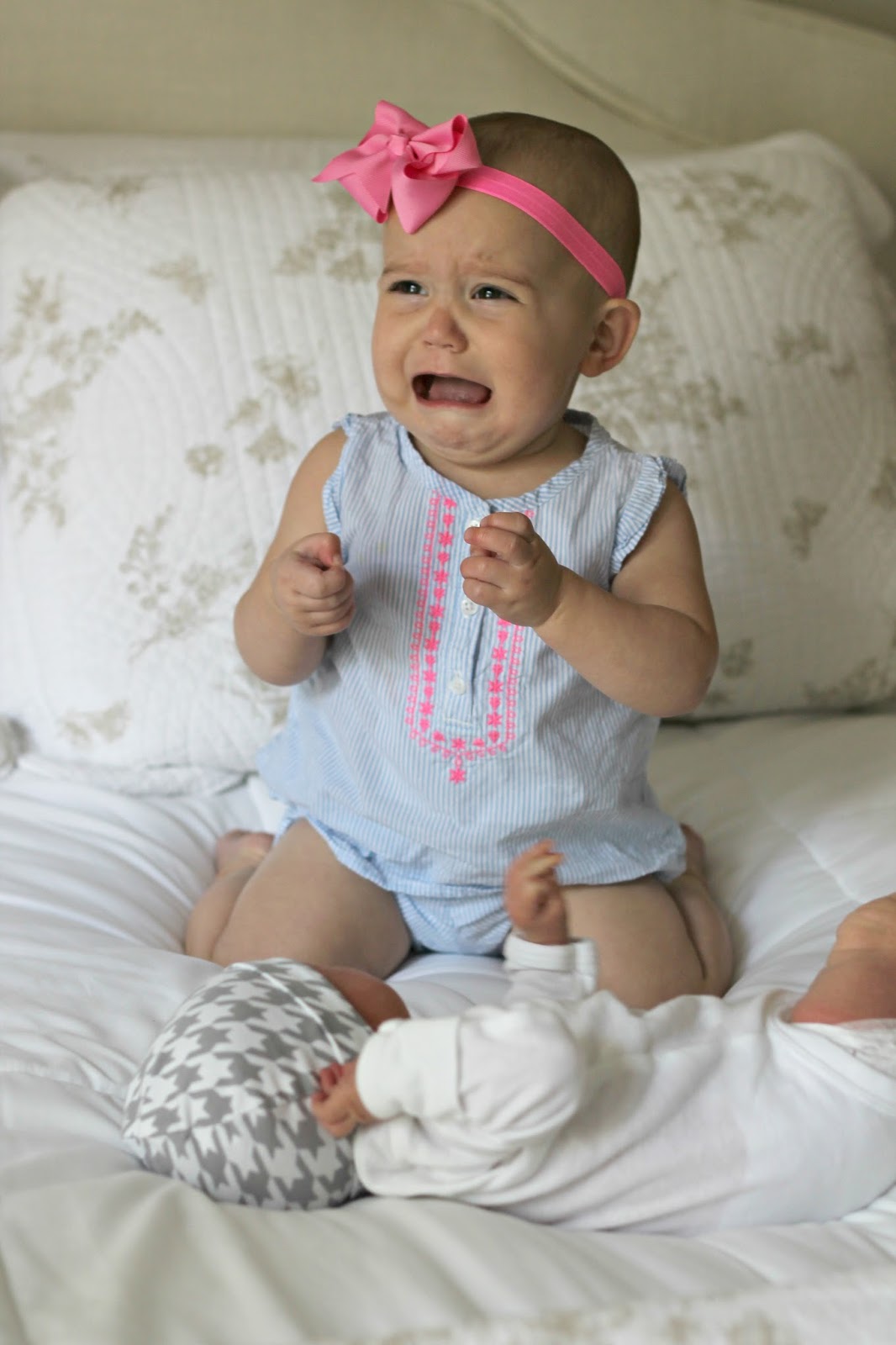 Who? Kidding. Kind of. He’s hanging in there. Still hating life although he’s getting better about letting Caroline wrestle him with hugs and pats. Soon enough we’ll get into a routine for daily walks again and hopefully he’ll perk back up.

A Maxed Out DVR in the Marcellino House