Finally, I know! I actually had this post written 99% of the way a few weeks ago and had planned to post all of our master bathroom projects all at once, but nope, didn’t happen. However, I finally have part 2 ready for ya today…

As the master bathroom floor was being renovated we simultaneously began on the next project — the shower! This was actually one of my favorite parts of the renovation because I knew exactly what I wanted my dream shower to look like — white subway tile to the ceiling, dual shower heads, roomy shower bench, seamless glass and marble hexagon flooring.

But let’s start from the beginning! The worst of the wood rot was located under the shower. Not only did the shower leak destroy the floor, the shower pan was cracked and the fiberglass shower walls had begun to pull away from the drywall. So we definitely had to rip out the entire shower and start over, which was music to my ears because the original beige fiberglass shower was pretty nasty.

As a reminder, here is what we were originally working with… 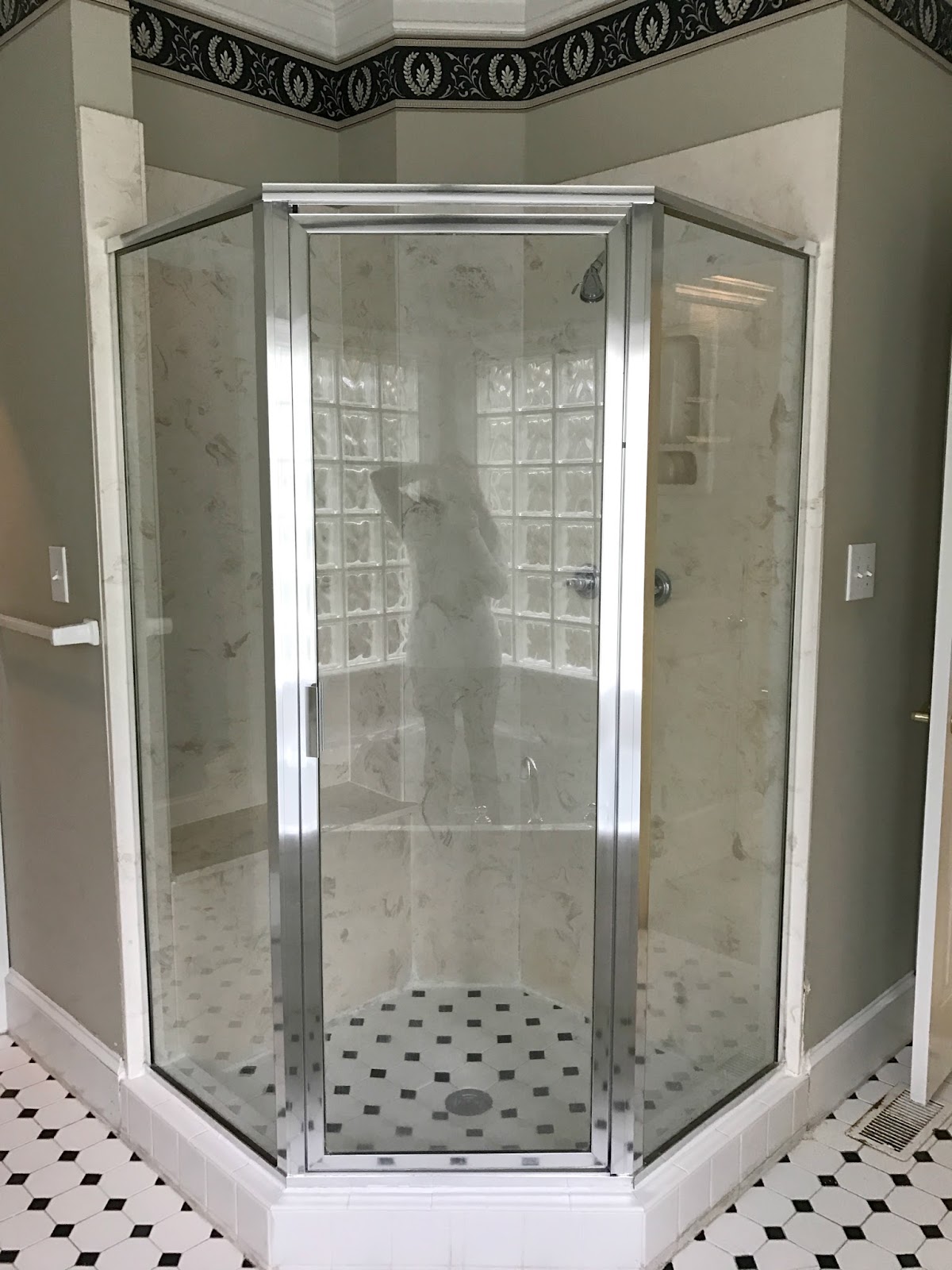 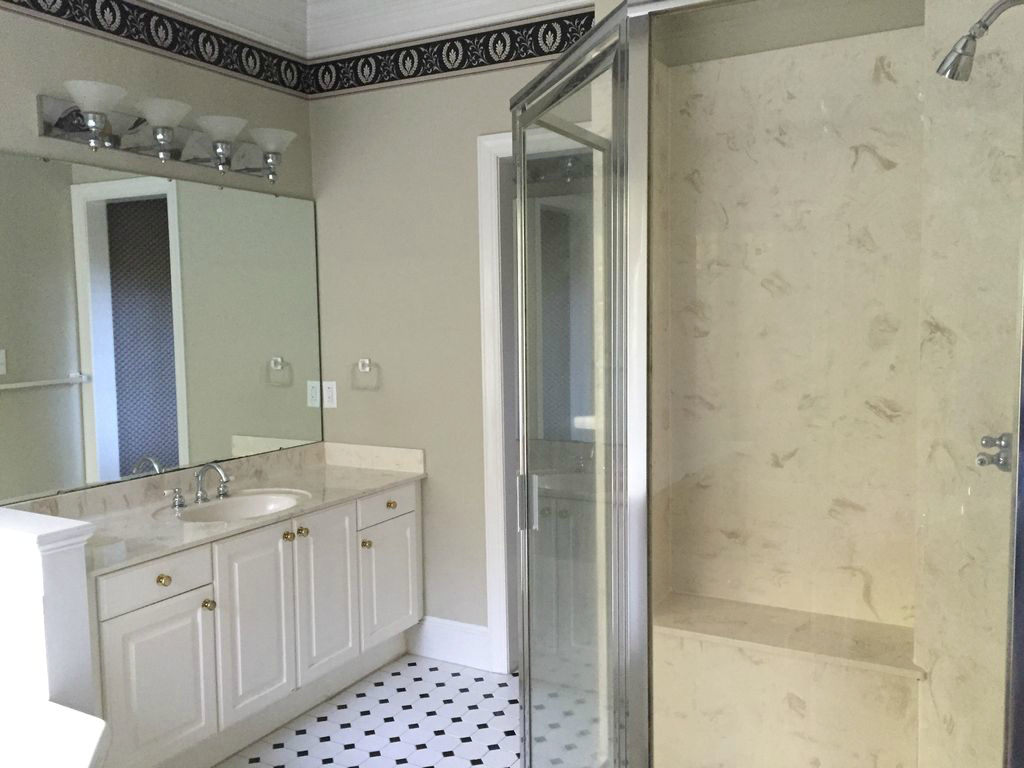 And here was my inspiration behind my dream shower… 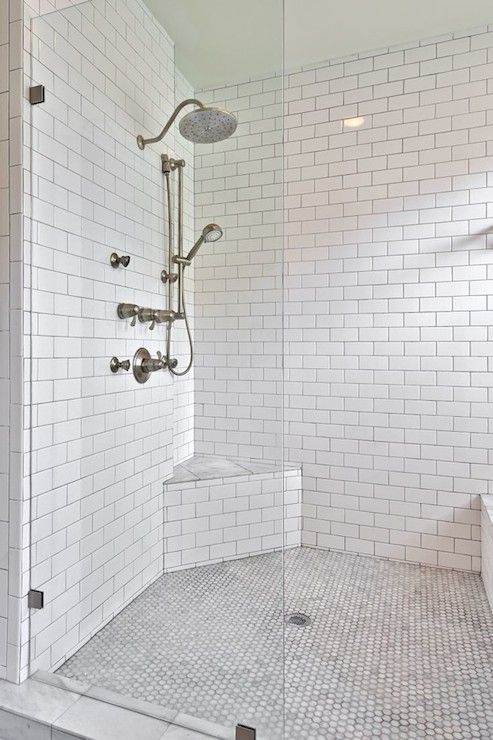 I seriously love every single thing about this shower. It is perfection. 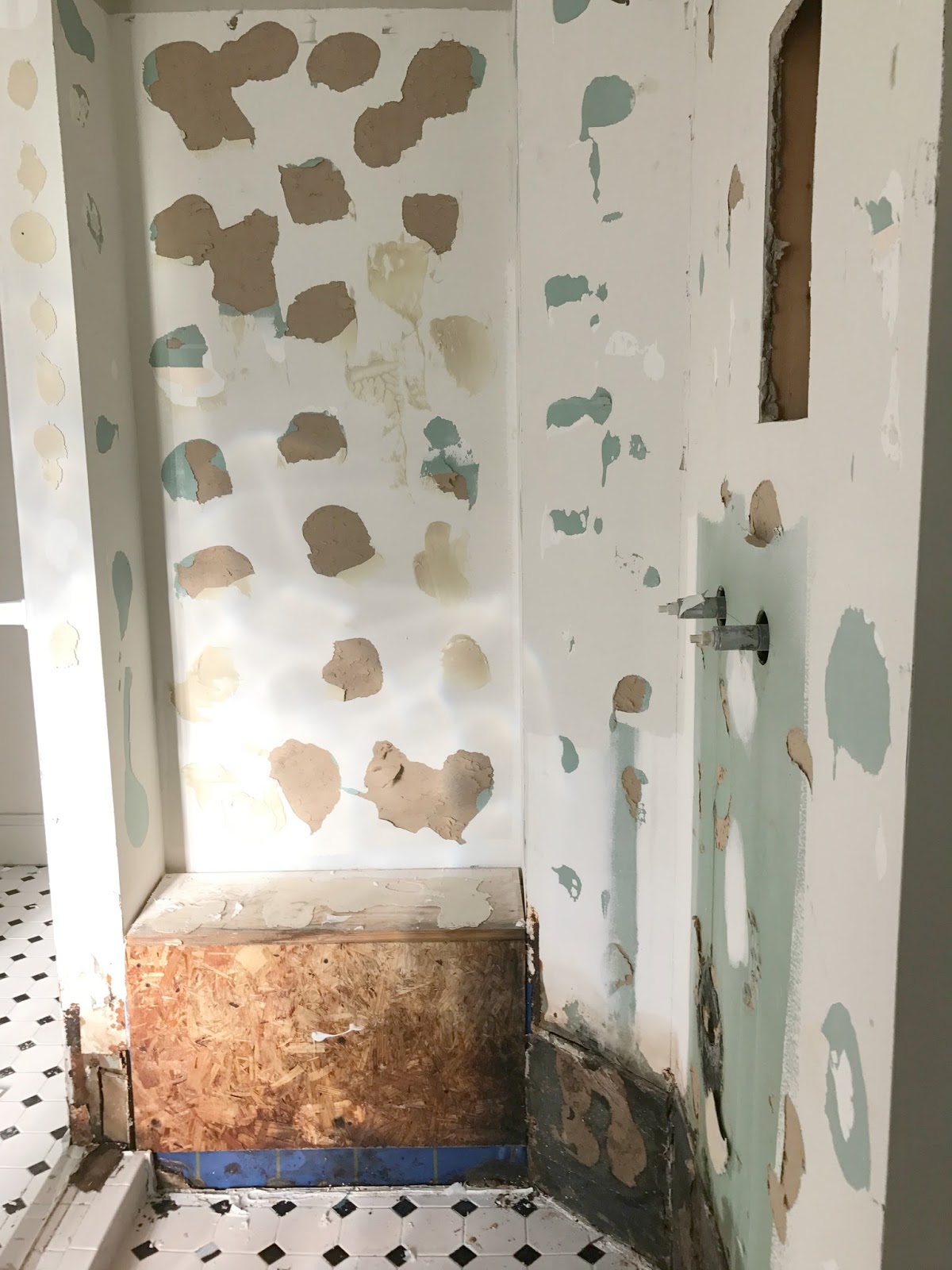 Once the fiberglass walls were removed you could see the all of the moisture underneath! 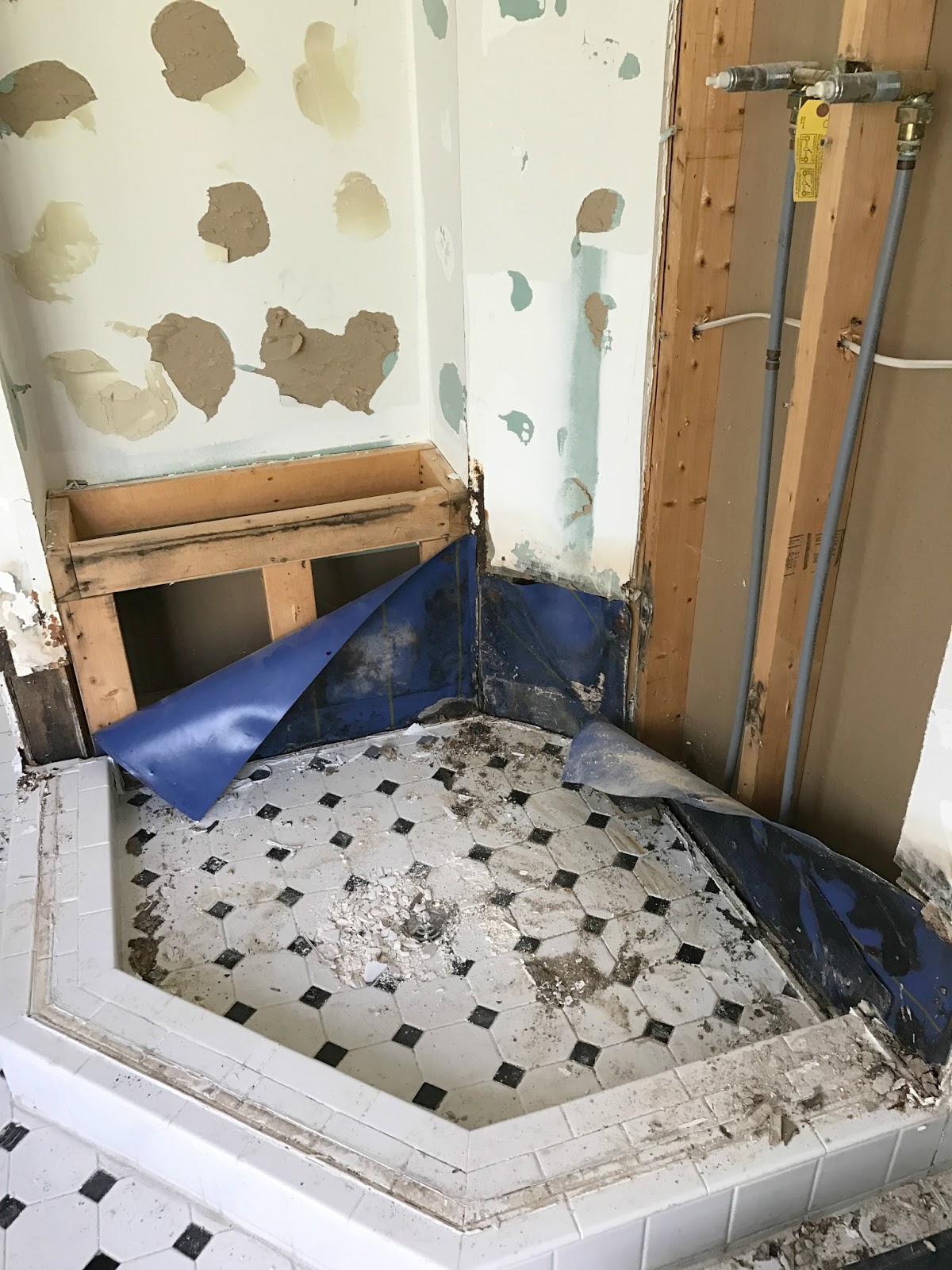 During demo I received an extremely helpful warning that our shower glass was going to cost us a fortune due to the number of angles of the shower. So after the floor was rebuilt we asked the crew to rebuild the shower curb without the additional angle and just make it a right angle. This saved us a tremendous amount of money!!! 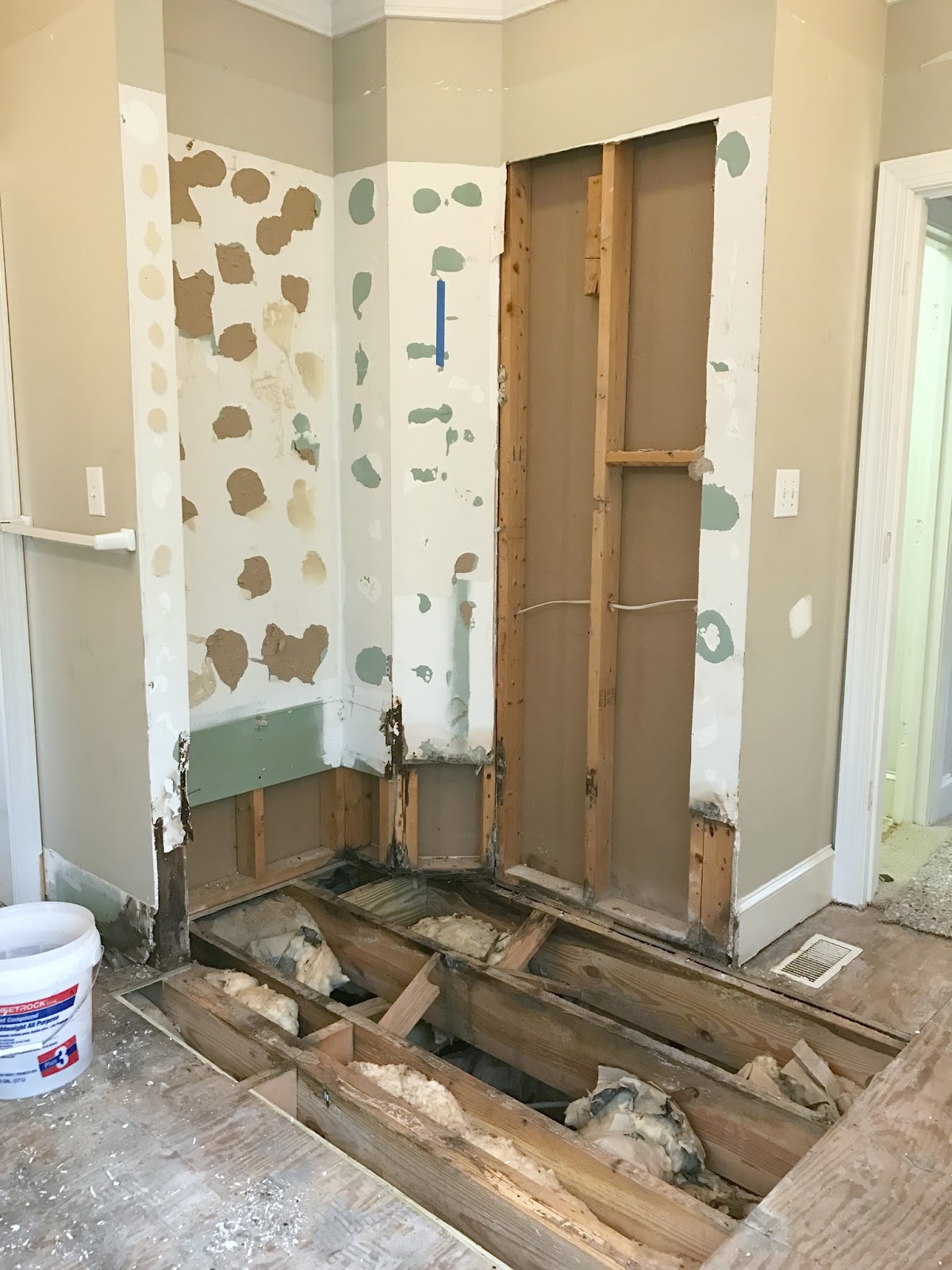 Boom — shower gone. Next we had to get a plumber out to plumb for the second shower head. This was not expensive AT ALL but was such a huge feature on my wish list. We had a dual shower head in our last master bathroom and it was definitely something I didn’t want to live without in our new home. I wanted one large rainfall shower head above and then a second hand-held shower on the wall. I use them both equally, at the same time, every shower. It is SO nice to have a hand-held for shaving, cleaning and squeezing two showers in at once (ya know, for the kids).

I amazon primed all of the hardware a few days before the plumber arrived. I didn’t love the options at Home Depot or Lowes and the upscale bath places were so grossly overpriced in my opinion. Amazon had a TON of options and I was able to read lots of reviews when selecting each item. I also was able to remove the flow restrictors before installation which was key for the water fall shower head! 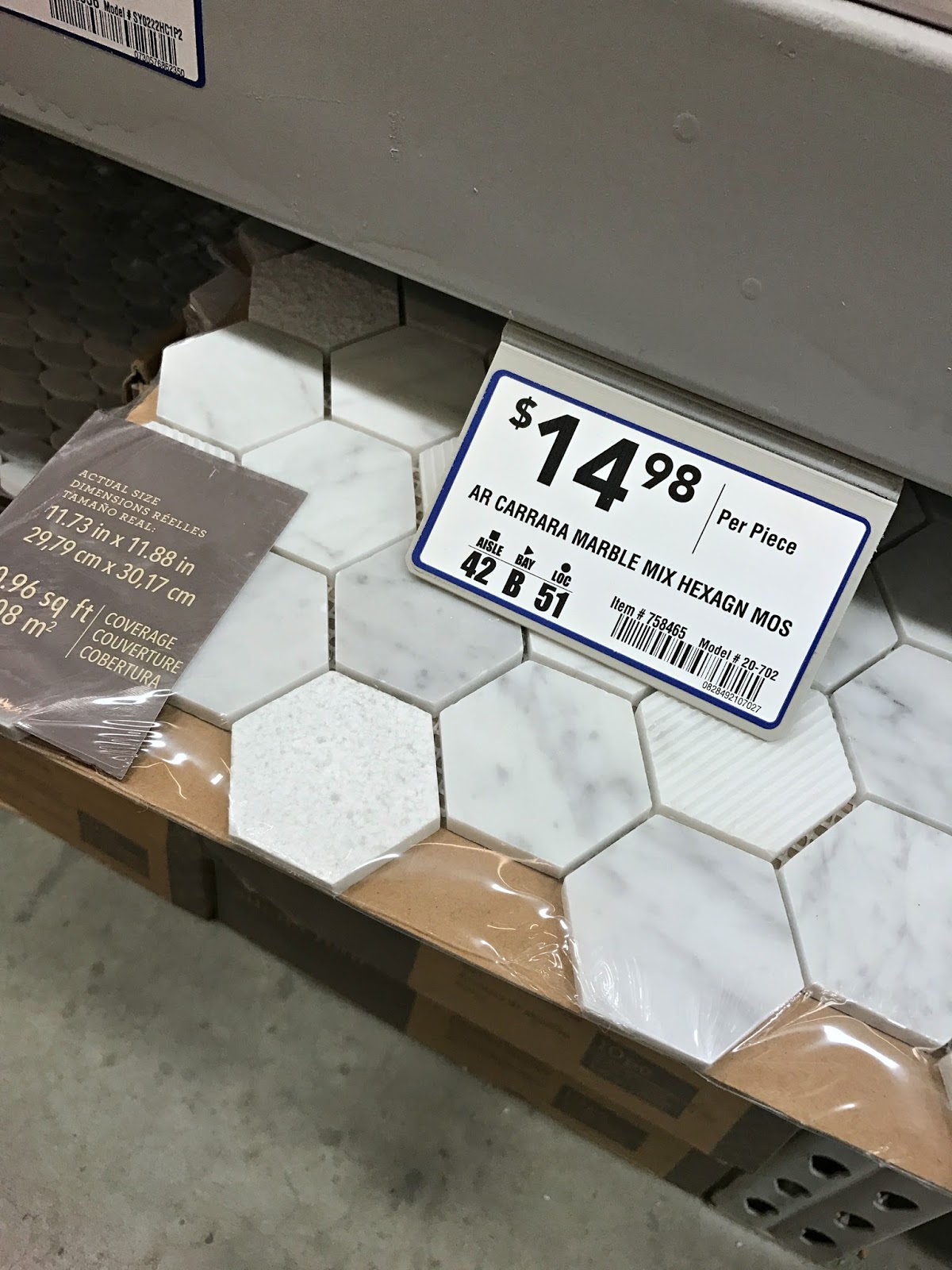 Once the shower was plumbed it was time to frame out the shower bench and wall niche. Then came the tile! As I mentioned, I wanted floor to ceiling white subway tile installed with grey grout. For the floor I splurged on Carrara marble hexagon tile. I really didn’t want to use marble because of the maintenance but we sealed it after it was installed and will have to do so annually. But it’s worth it because the hexagon tile is absolutely gorgeous. I was too impatient to wait until the shower was fully dried to snap my pictures so you can see on the left what it looks like wet and on the right what it looks like dry… 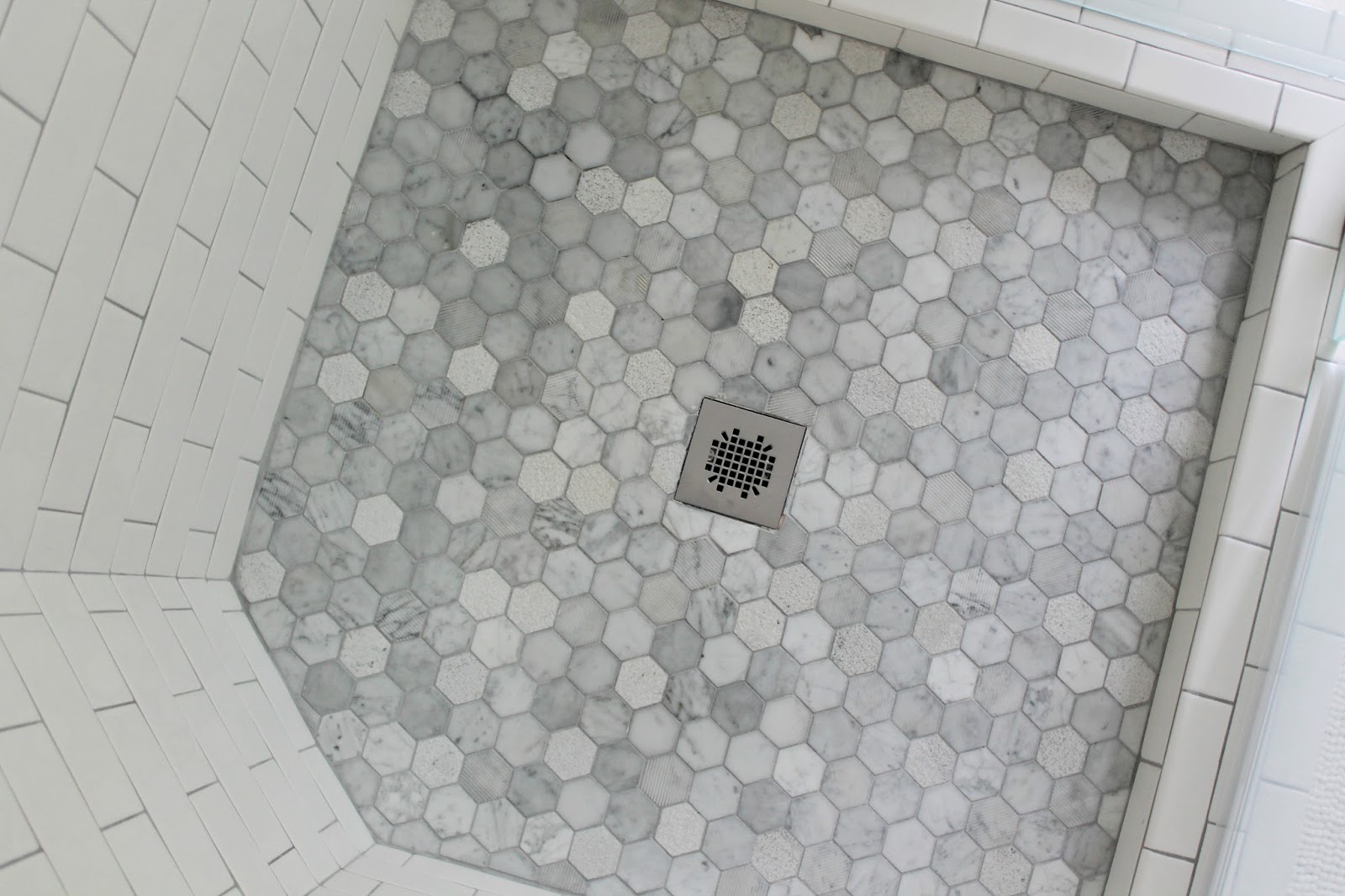 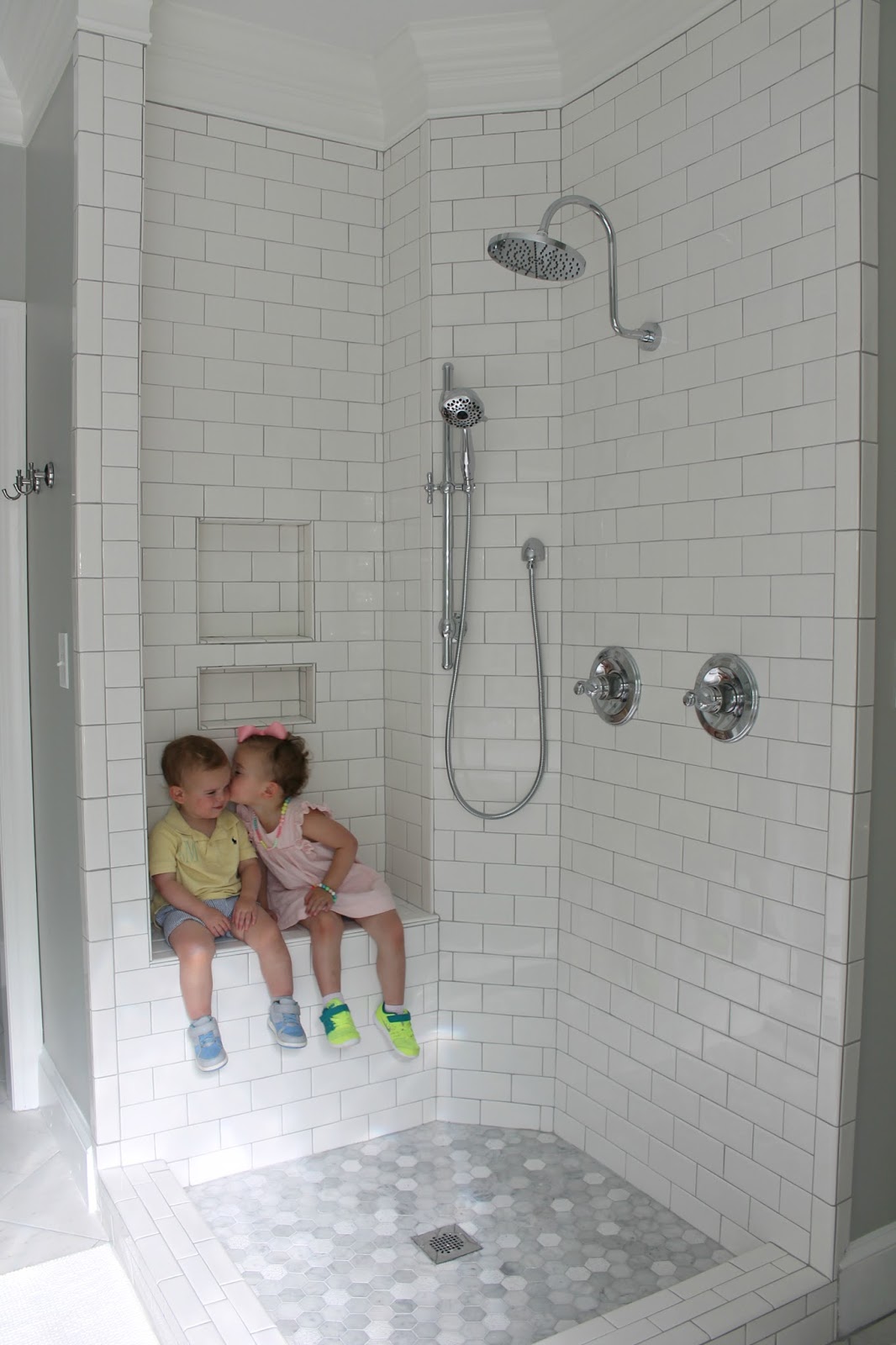 Once the tile work was completed the shower fixtures and valves were installed. Then we had the shower glass company to come out to measure and order our seamless shower glass.  I still can’t get over how much glass costs, it was certainly a sticker shock to me. Oh, and it took a little over 3 weeks to arrive. We eventually got so impatient to use our new shower that for the last 2 weeks we just laid towels all over the floor and took showers anyway! 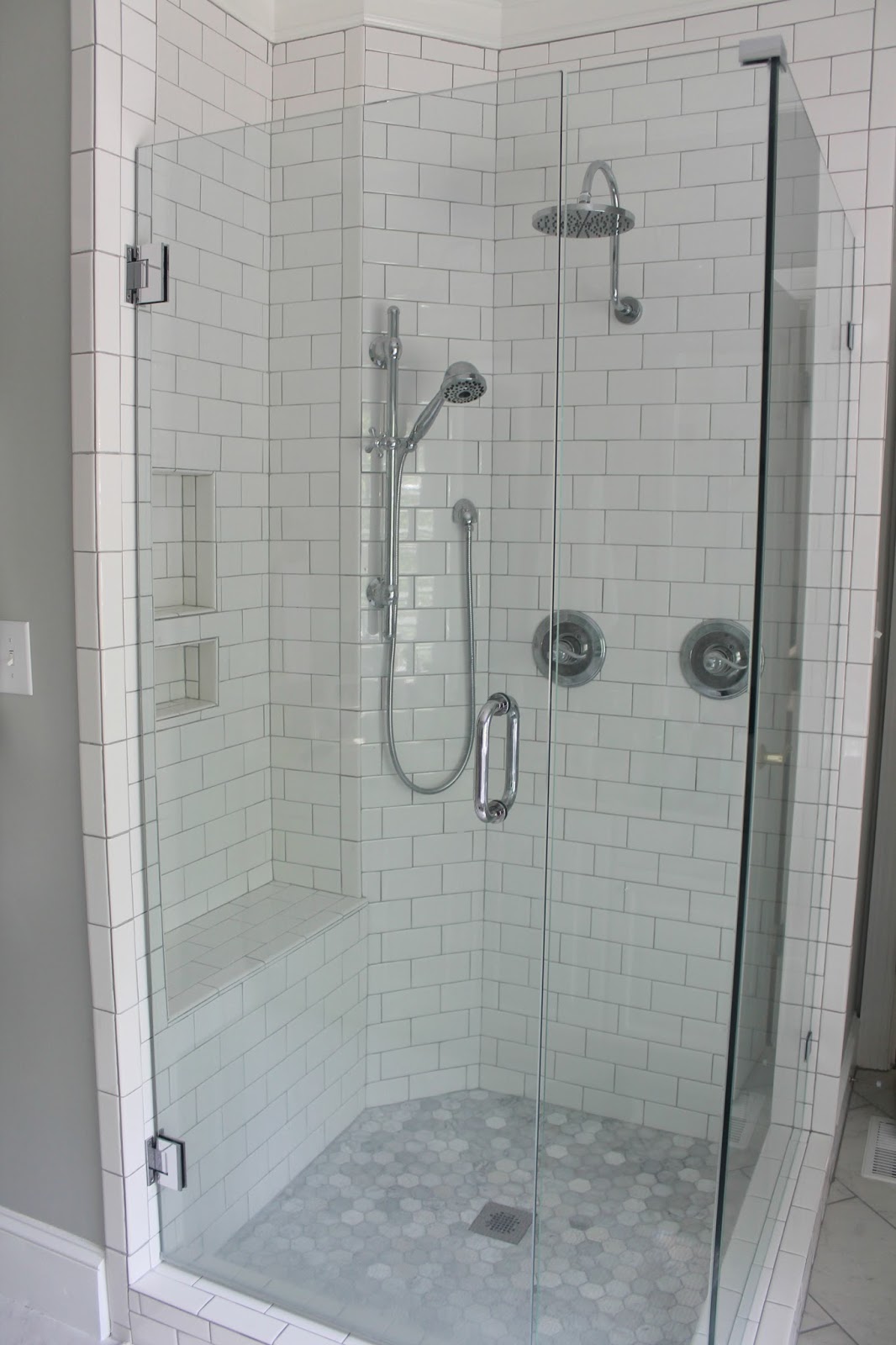 And DONE! Isn’t she beautiful?! I am so obsessed with my dream shower. Worth every penny! 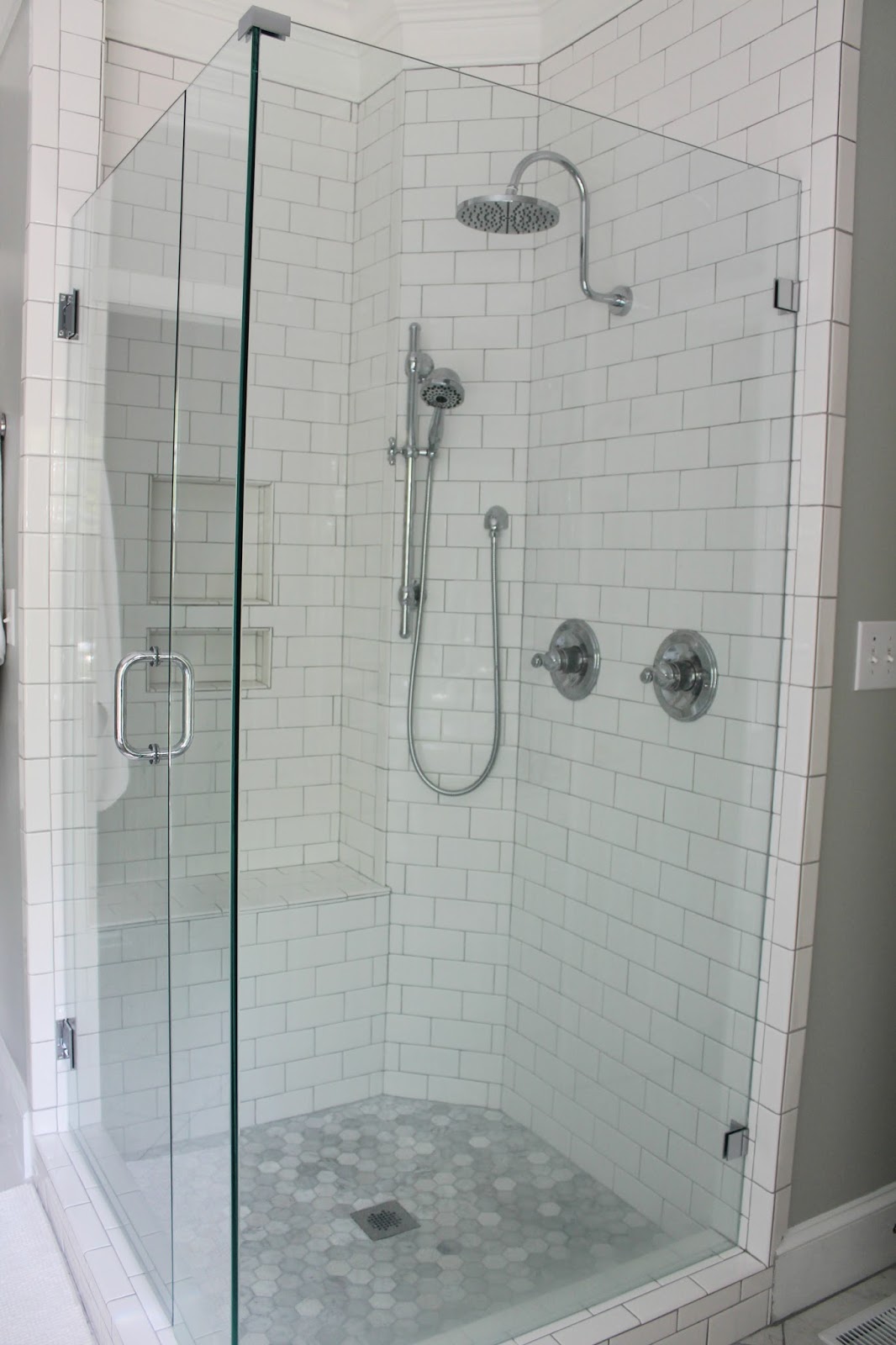 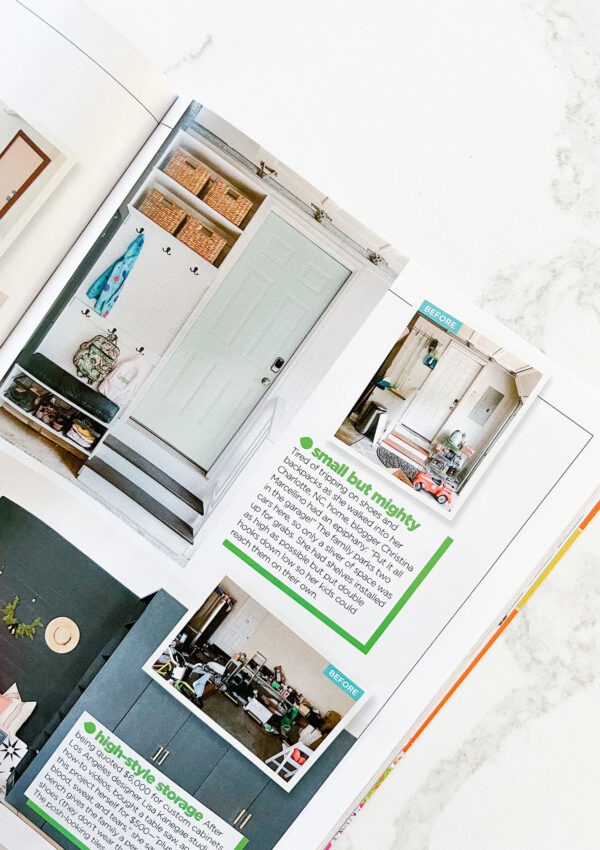 Our Garage Drop Zone (As Seen in HGTV Magazine!) 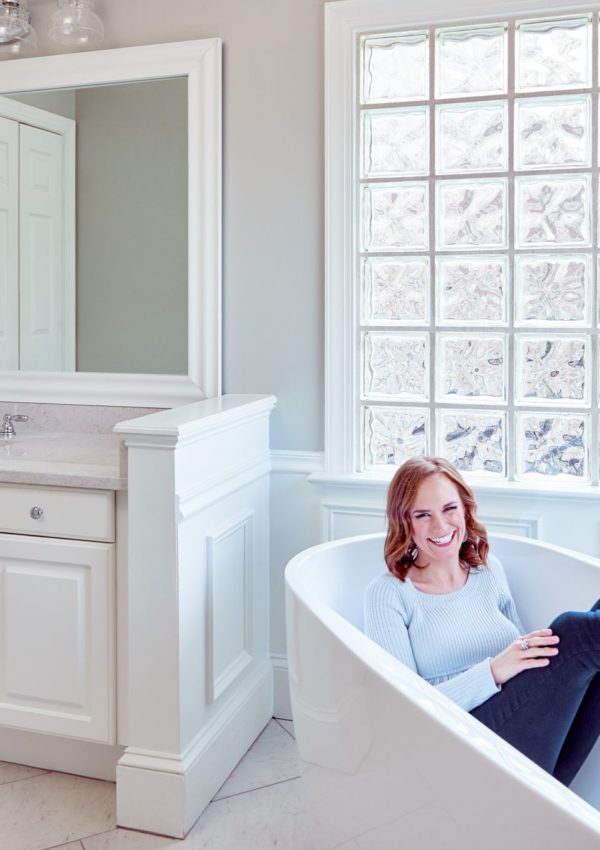